There may come a time when you’ll need to replace or update the piping for your kitchen sink, and this may seem daunting. In reality, it’s not all that difficult when you know what you’re doing. In this post, we’ll look at different kitchen drain pipes and sink pipe components, as well as why and how to upgrade piping from metal to PVC. 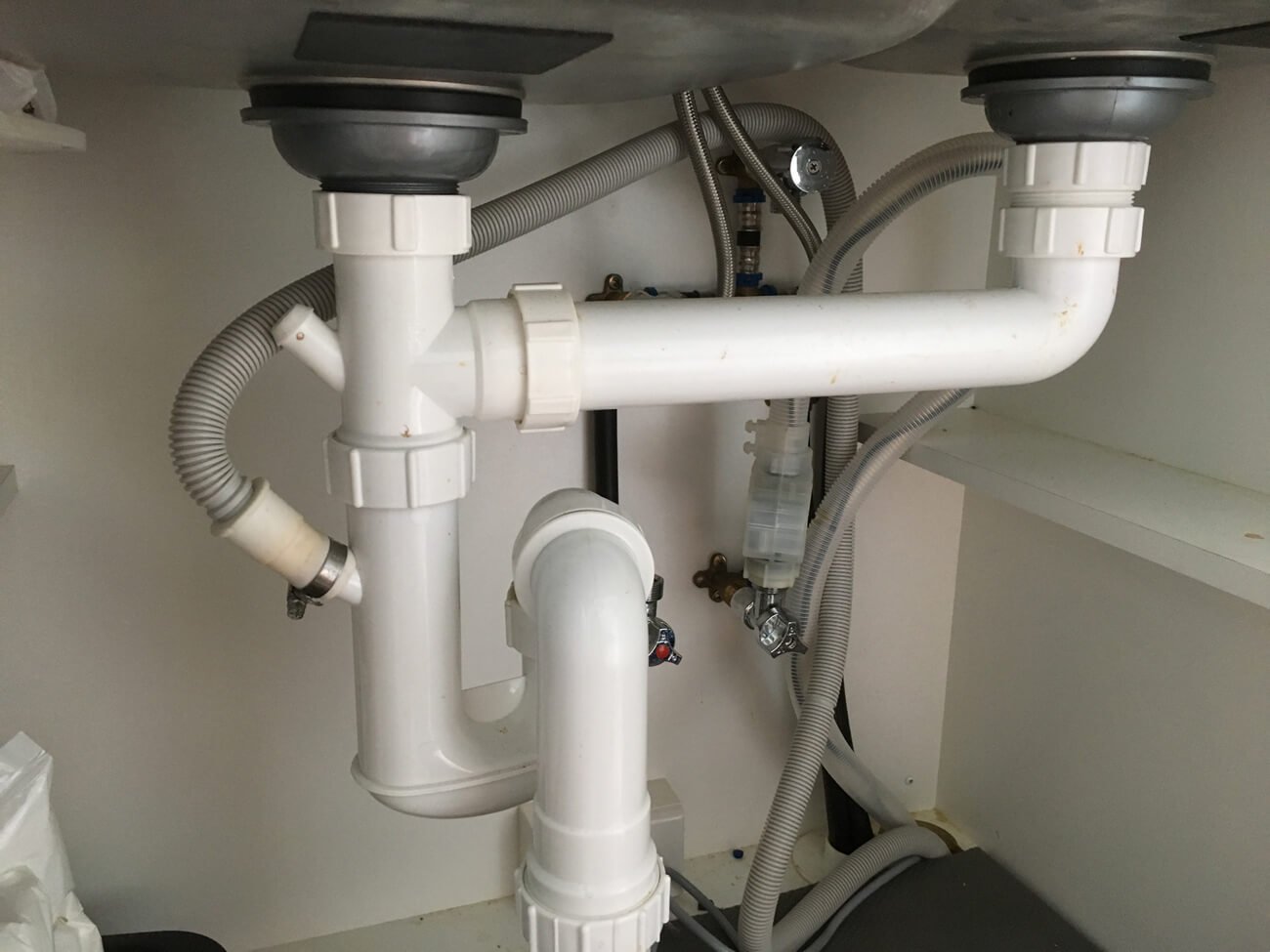 
Common Types of Drain Pipes for the Kitchen

There are four types of piping that are typically found in residential kitchen plumbing systems: copper, galvanized steel, ABS, and PVC. You may find that the piping for your sink consists of more than one type. While that can become confusing, it isn’t uncommon. Here’s how to tell which type of pipes you have in your kitchen:

Copper piping has been around since the 1930s, and it became really popular for residential plumbing systems in the 1960s, surpassing the use of galvanized steel. Copper is a penny-colored metal material that is strong, durable, and heat- and corrosion-resistant. This allows copper piping to be made thinner than other metal piping. As a result, it’s lighter and easier to work with. Unfortunately, copper pipes are typically more expensive than other options, making it less appealing to use.

Another common plumbing pipe material is galvanized steel. While it isn’t used a lot in modern piping systems, it was regularly used from the 1950s to the 1990s. Galvanized steel pipes are gray in color and are fairly thick-walled. This makes them very strong and durable, but heavy and cumbersome to work with. This type of pipe will become corroded over time and is best replaced with plastic piping.

Beginning in the mid-1970s, plastic pipes started to become popular for use in residential plumbing. Acrylonitrile butadiene styrene, or ABS, pipes were the first type of plastic pipes to be used in homes. ABS pipes are black in color and are lightweight and less expensive than metal pipes, and because they are plastic, there is no risk of rust developing. ABS pipes do, however, contain a chemical called bisphenol A, also known as BPA. There is disagreement as to the potential health risks of BPA to humans and animals. Though it is considered safe in certain amounts by the U.S. Food and Drug Administration, it is banned from being used in new home construction in some locations.

Polyvinyl chloride (PVC) pipes are the most common option for residential plumbing systems and has been for the last 40 years. PVC is usually white in color. It’s flexible, durable, and lightweight, which makes it easy to use. PVC pipes are also good at muffling the sound of water as it flows through the piping systems; is resistant to chemical and water degradation; and is less expensive than other options.

Why You Should Replace Metal Kitchen Pipes with PVC

PVC pipes are the ideal option for residential plumbing. If you currently have metal pipes under your sink, there are some good reasons to upgrade them to plastic PVC pipes. The first reason is that PVC pipe is significantly less expensive to replace. Down the line, if you have to make repairs, it’s going to be a cheaper project. Secondly, PVC pipe is easier to work with because it’s much easier to cut. You can invest in a PVC pipe cutter, but really, the hacksaw you have in your garage will do the job just as well. Lastly, PVC pipes don’t rust, and metal pipes do. With PVC piping, you won’t have to worry about holes and leaks in the pipes due to corrosion.

At first look, the pipes under your sink may look a bit complicated, but the system is actually quite simple. There are three main parts: the tailpieces, P-trap, and the compression fittings that hold them together.

The tailpiece, also called sink tailpiece, is the short piece of pipe located between the sink drain at the bottom of the sink and the P-trap. This pipe should be 6”-10” to provide proper drainage.

The P-trap is the curved piece of pipe that attaches to the sink tailpiece. It consists of two parts, the U-bend and the trap arm. The U-bend is the curved section of pipe and the trap arm is the straight section of pipe that is connected to the U-bend. The P-trap is a feature of the piping system that is designed to trap water at the bottom of the curve so that sewer gasses cannot pass through into your kitchen. As you run water in the sink, the old water in the P-trap is flushed out and new water replaces it.

The P-trap parts are assembled with compression fittings, which are a type of coupling used to connect two pipes or a pipe to a fixture or valve. Compression fittings are used because they are easy to install and disassemble when you are repairing or replacing pipes. 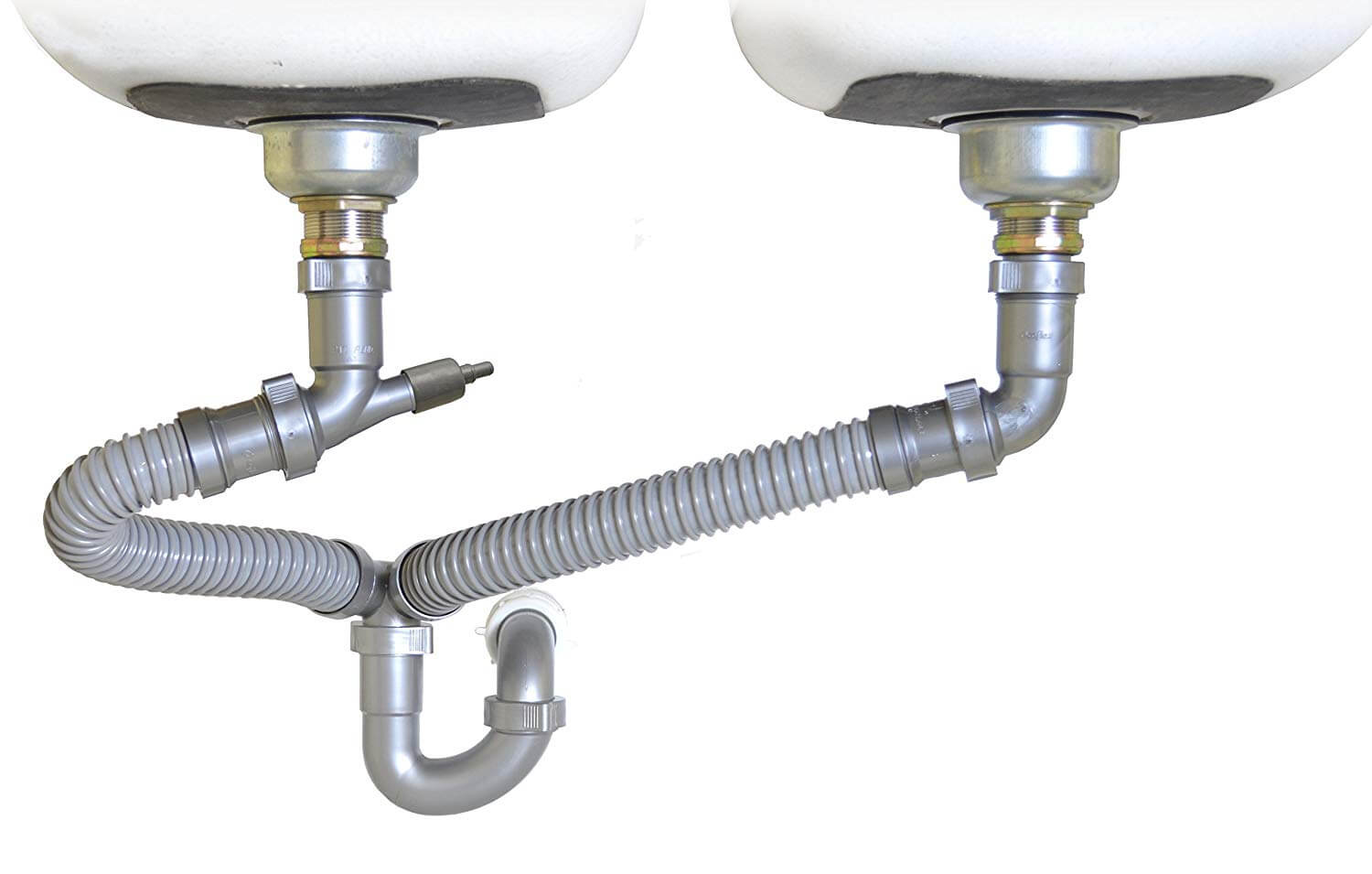 Changing your metal kitchen sink pipes to PVC isn’t as difficult as you think. Here are the steps to follow to replace your current system with PVC:

The above are some general instructions for replacing the piping system under your kitchen sink. Here are some tips that will make the process easier for you:

Replacing old, corroded, or leaky metal pipes under your sink with PVC pipes is an easier, less expensive, and more durable option than replacing them with new metal pipes. When you follow the steps and tips provided above, you can successfully replace old kitchen sink piping yourself, saving money and giving yourself a feeling of satisfaction for a job well-done. You can also read what are domestic grease traps for kitchen sink.

Mark Ligon is the Marketing Manager at PVCFittingsOnline.com, a leading supplier of PVC pipe, fittings, valves, plumbing supply, and more. Mark enjoys working on DIY projects around his home and providing advice to individuals looking to complete DIY projects of their own.

There are different ways to secure a property. O cameras guarantee clear video footage of an unwanted guest. It varies …