Hanging something heavy or large is a little more complicated than just tapping a wire nail into the drywall (and if you have plaster walls, you should be putting nails in them at all). A large or heavy picture could fall off the wall if you don’t hang it properly, and then all you’ll have is a broken picture.

Large and heavy pictures, mirrors, and objets d’art need to be securely anchored to the wall. That means they should be anchored directly into the stud or if there isn’t a stud available, anchored into the wall with an anchor bolt, molly bolt, or toggle bolt.

How to Hang a Large or Heavy Picture: Best and Easiest Ways was last modified: September 30th, 2022 by architectures ideas 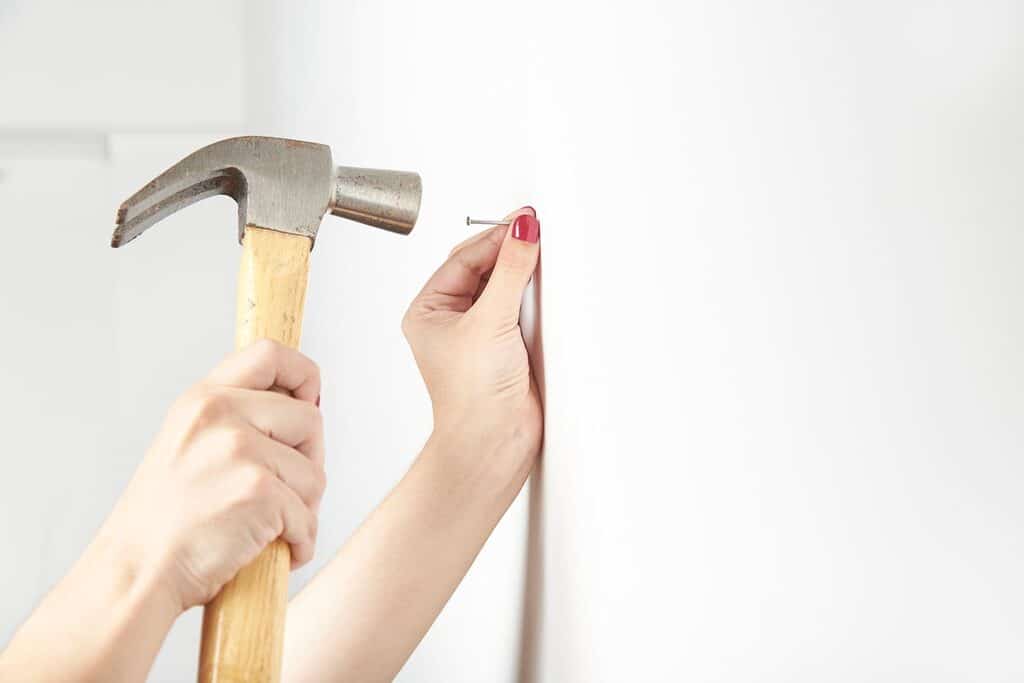 Before you start pounding nails or drilling holes in your wall, it’s important to know what your wall is made of. If it’s drywall, it’s okay to use nails, but if it’s lath and plaster, you should drill holes and use screws. If it’s masonry, you’ll need to drill holes with masonry bits and hang your large or heavy picture using screws. Modern homes tend to have drywall, but homes built before 1940 or so usually have plaster walls. 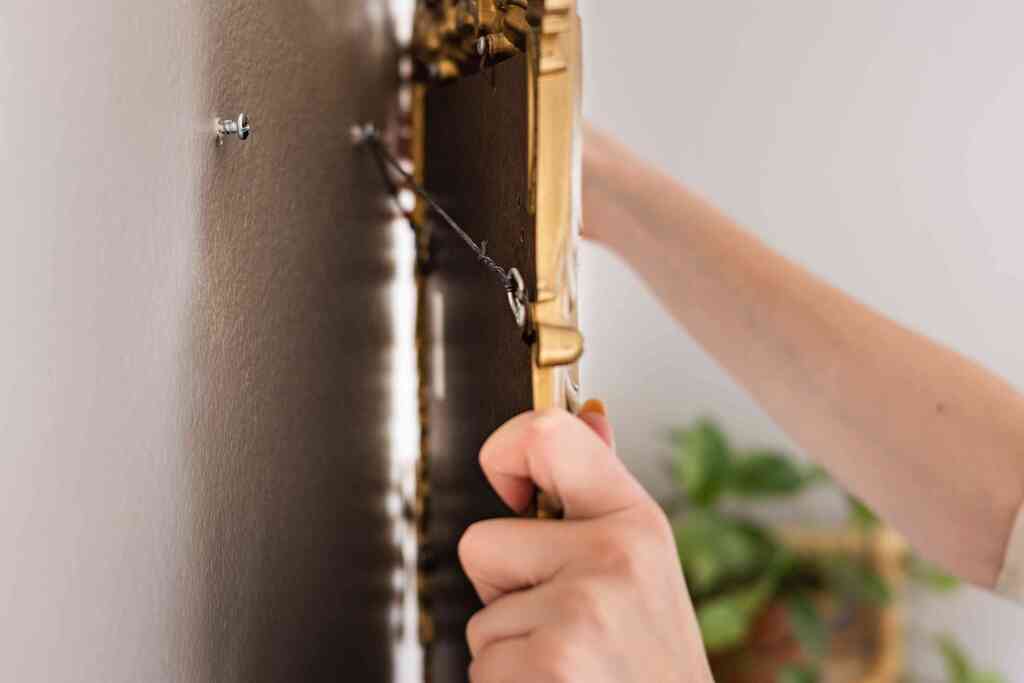 You can usually locate the studs beneath a drywall surface by knocking on the surface – empty spaces will make a low, hollow sound, while the areas with studs beneath them will sound higher-pitched and solid. You can also determine where studs will be by shining a light against the wall, then putting your face up next to it to look for irregularities in the surface – on older walls, you might notice that the wall bows in at intervals and you may even see the heads of the nails beginning to poke up through the paint.

A drawback of these stud-finding methods is that it can be easy to miss the stud when you’re driving in your nails or screws, because they’re only a couple of inches wide. Of course, you can also use an electric stud finder to locate the studs in most walls, although they tend to work better on drywall than on plaster. An electric stud finder will tell you when it finds the edge of a stud, and you can measure about ¾ of inch further to anchor your large and heavy picture frames directly in the middle of the stud.

Also Read: How to Use Drywall Anchors to Hang Heavy Stuff on Your Walls

Use the Right Hanging Hardware 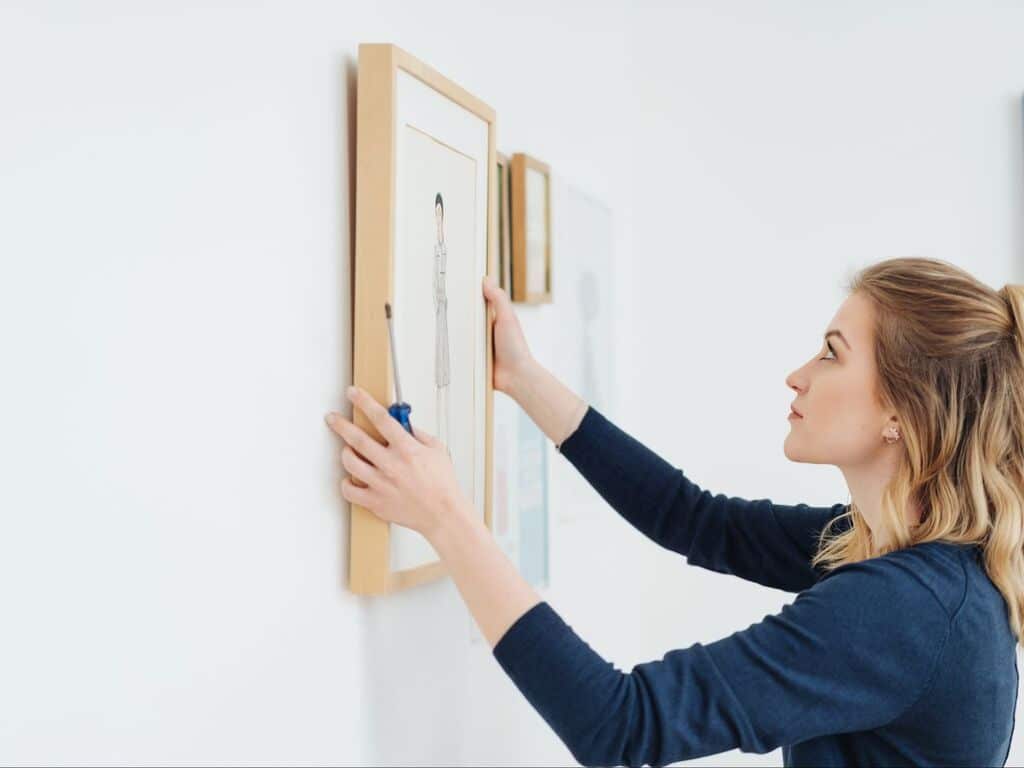 Now that you know where your studs are, you can choose your hanging hardware and put up your picture. First, use a bathroom scale to weigh the item you’re hanging. You’ll need to know how much it weighs so you can get the right fasteners. It will say on the package how much weight a particular fastener is rated for.

If you’re able to hang your picture directly from a stud, then you can just use a nail that will penetrate the stud. If you want to hang your item between studs, you will need a fastener that can support the weight of the item.

There are three main kinds of fasteners you can use to hang heavy pictures, mirrors, and decorative items: molly bolts, anchor bolts, and toggle bolts. Anchor bolts are screws that come with plastic anchors that expand once placed in the wall, anchoring the screw in place.

You can unscrew the screw a little bit and use the screw to hang your picture hook, or just hang the picture on the screw itself.

Molly bolts are similar to anchor bolts, but the anchors are made from metal that expands inside the wall. You use basically the same process to anchor molly bolts. Drill a hole big enough for the bolt, tap it in and then tighten down the bolt with a drill. This should activate the metal wings that pop out of the molly bolt inside the wall. Molly bolts will hold a little more than anchor bolts and are suitable for drywall or plaster.

Toggle bolts are good for holding up the heaviest items, like large mirrors. Toggle bolts have spring-loaded wings that fold down on either side of a bolt. Drill a hole big enough that you can push the folded-down wings through the hole, allowing them to open fully inside the wall. Use the best drill to tighten the bolt – the toggle should dig into the drywall or plaster on the inside of the wall. Then you can hang your picture directly from the bolt, or use the bolt to hang other hanging hardware.

If you want to hang something heavy, you need to make sure it’s securely anchored to the wall. Fortunately, there are plenty of options available to anchor a large, heavy picture to any type of wall surface.