There will never be a building for a memorial to World Cup migrant workers who have lost their lives in Qatar!

During the construction of Qatar’s stadiums for the expected FIFA World Cup 2022 World Cup, many migrant laborers perished. And, Architects of Paris, Week Architecture, suggested a memorial monument in 2014. It is in honor of the migrant laborers who lost their lives.

Entitled the Qatar Cup Memorial, it draws attention to the total number of unpredicted deaths connected to the construction of structures. While the number is still unknown, it makes us think about how a great tragedy surrounds an iconic event that is a glorious celebration internationally.

Qatar World Cup Memorial – Architects of 1 Week 1 project has presented a “spontaneous architecture” design in one week, which reflects the severity of the humanitarian loss. 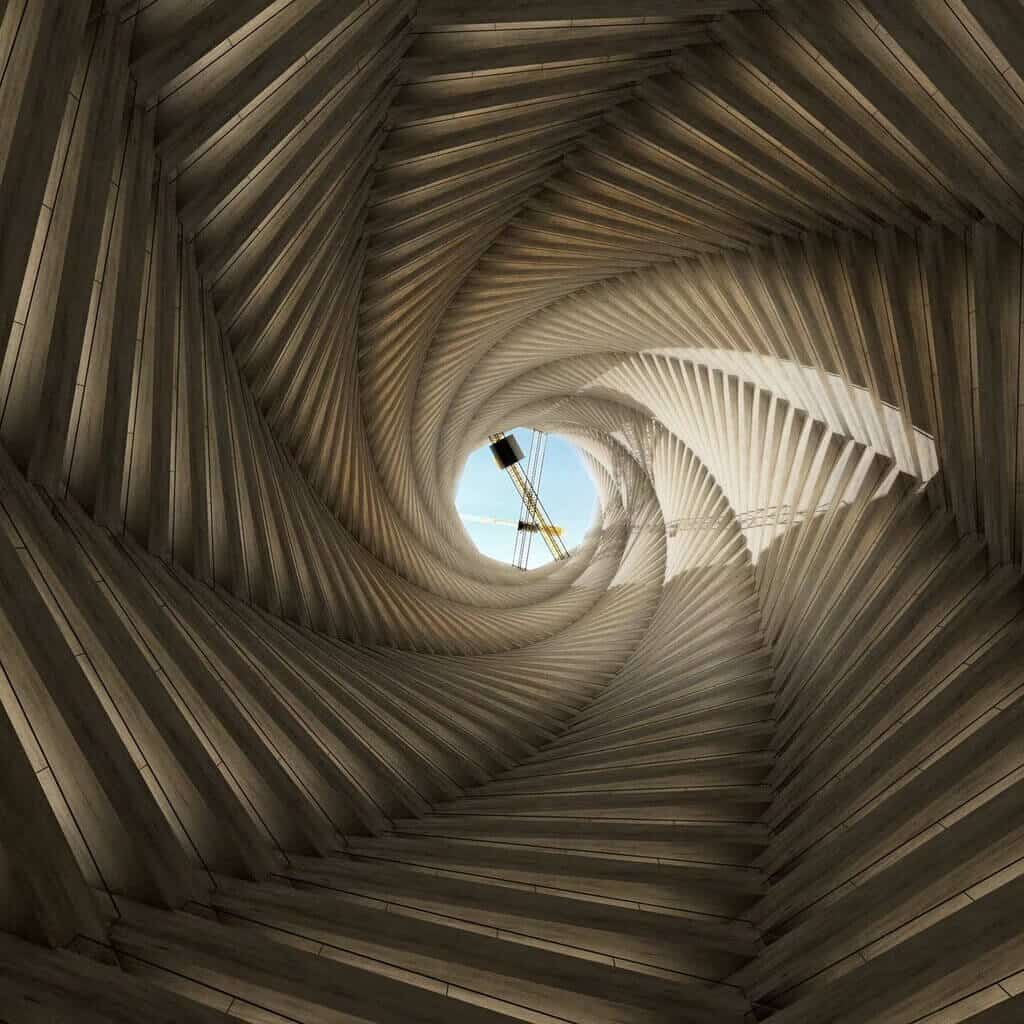 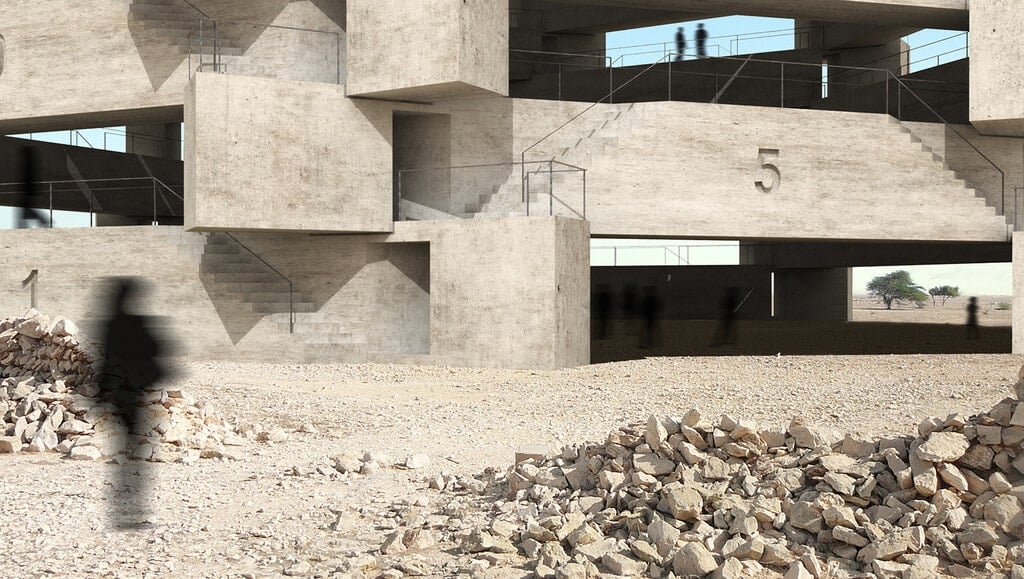 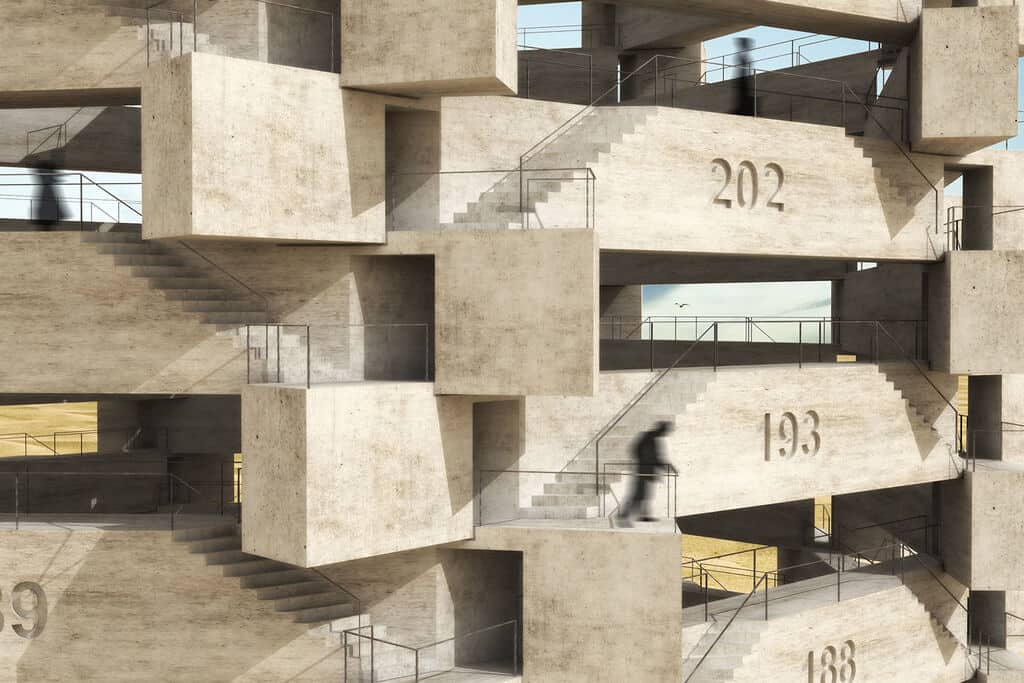 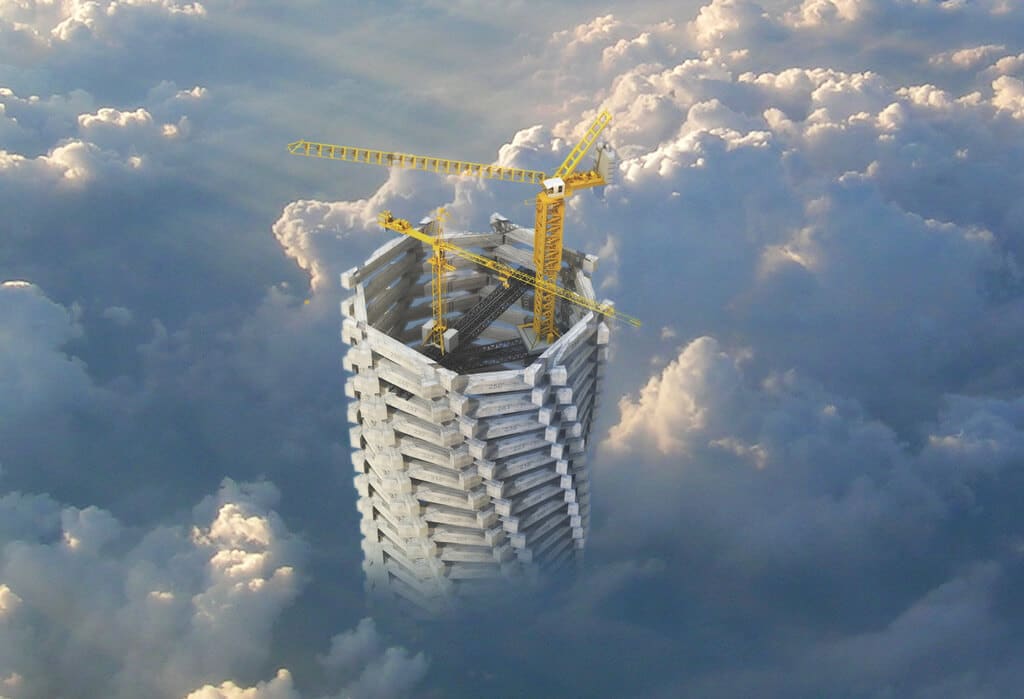 The concept of Qatar’s tallest tower is in a twisting shape that is constructed of concrete slabs/modules. They stacked them one above the other as floor modules, with two modules and two staircases per floor. Each solid block represents a deceased worker. So, as the number of deaths increases, the tower height also increases.

In 2014, the designers predicted that the height of the memorial would reach up to 1.5km if there is no decline in the number of lost workers. While at present, when the work is complete and the world cup is about to launch, then the skyscraper rises in the air reaching up to 4.4km, with the number of deaths as 6751. 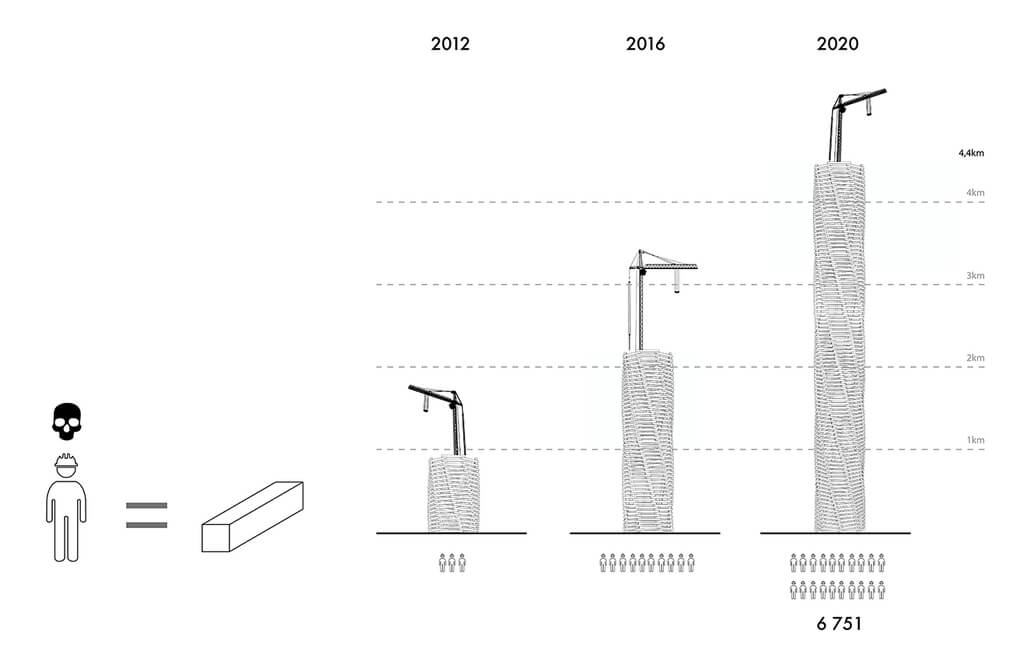 The analysis illustrates the height of the tower rising high from 2012-2020, divided into three periods 2012,2016, and 2020. It illustrates that each concrete slab represents a worker who has breathed his last on the construction site. Overall, the height (4.4km) multiplies by at most three times in 2020 when compared with the height(1.5km) in 2012.

There is a significant amount of increase in both the death toll and the rise in towers that needs to be addressed as a priority. 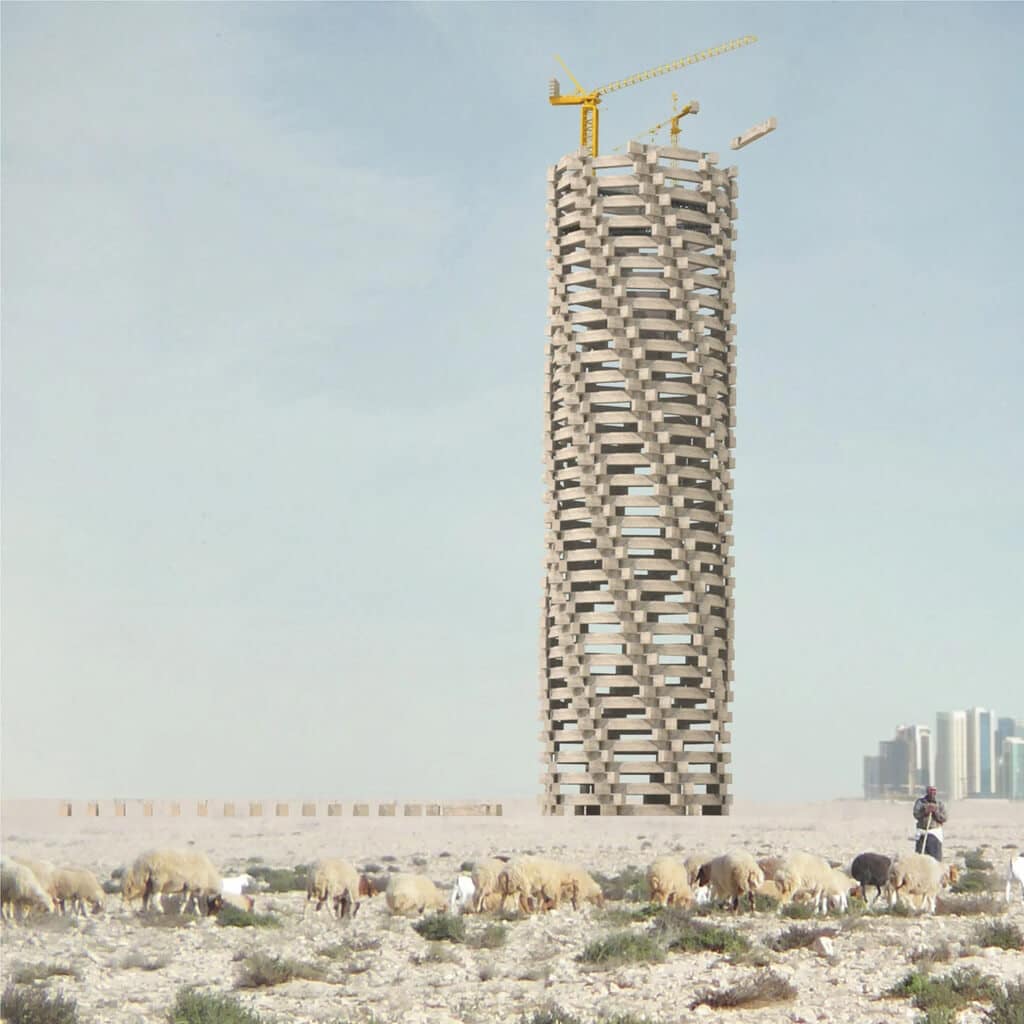 Thousands of workers died during Qatar’s 2022 world cup stadium-related constructions. Injustice and most tragic situations happen in Qatar’s construction activities for workers. Despite their continuous deaths, the names of workers, and reasons for losses are not known, and the information is not circulated by the news. Moreover, workers resume back to their duty due to construction deadlines.

The analysis of the British daily newspaper – ‘The Guardian’ reveals that more than 6500 migrant workers have lost their lives since Qatar was awarded the World Cup. The majority of the workers were from Srilanka, India, Pakistan, Nepal, and Bangladesh. 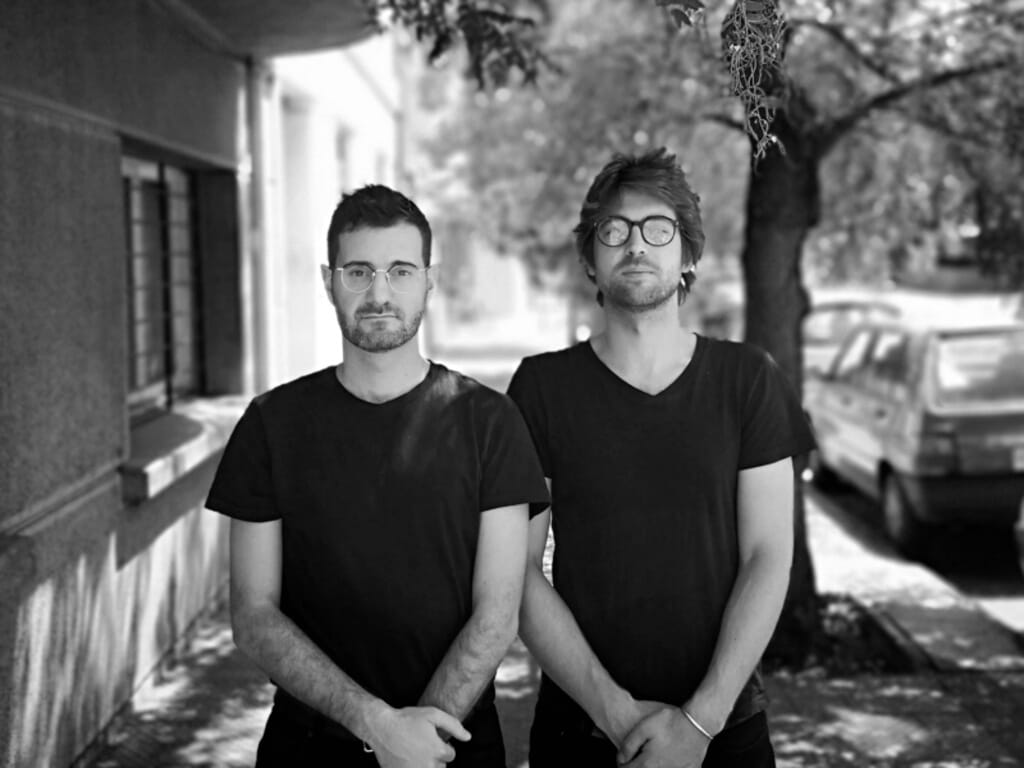 The agency 1 Week 1 Project is started by two Paris architects – Axel de Stampa and Sylvain Macaux. They are not afraid to raise and address the issues of society.

“We chose the skyscraper typology because the impressive and imposing nature of the extreme height that the project could reach allows it to reflect the scale of the humanitarian disaster and the constantly increasing number of victims,” the studio told Dezeen.

“Moreover, as it is a perpetually growing tower, there is no theoretical height limit, another typology of the project would not have allowed this.”

There is an utmost need for effective measures to drive the workforce by human rights and work in a pleasant environment as per international standards. While the design of the Qatar World Cup Memorial is just a conception and not for actual construction, it raises awareness so that one can understand the severity of the problem and raise a concern.