The mid-century modern style of architecture emerged after World War II. It became widely popular across America in the 1950s as a shift away from the traditional and as a step into the modern world. Widely known for their minimal aesthetic, mid-century modern houses feature clean sleek lines and low-lying footprints.

What was once a set of distinct American homes that evolved into a style, the mid-century modern style became widely popular as a style of interior decor. It has seamlessly blended into the fabric of modern homes and is making a resurgence in the realm of interior design and decoration today.

This article explores the fundamentals of the style and looks at numerous mid-century modern house ideas. 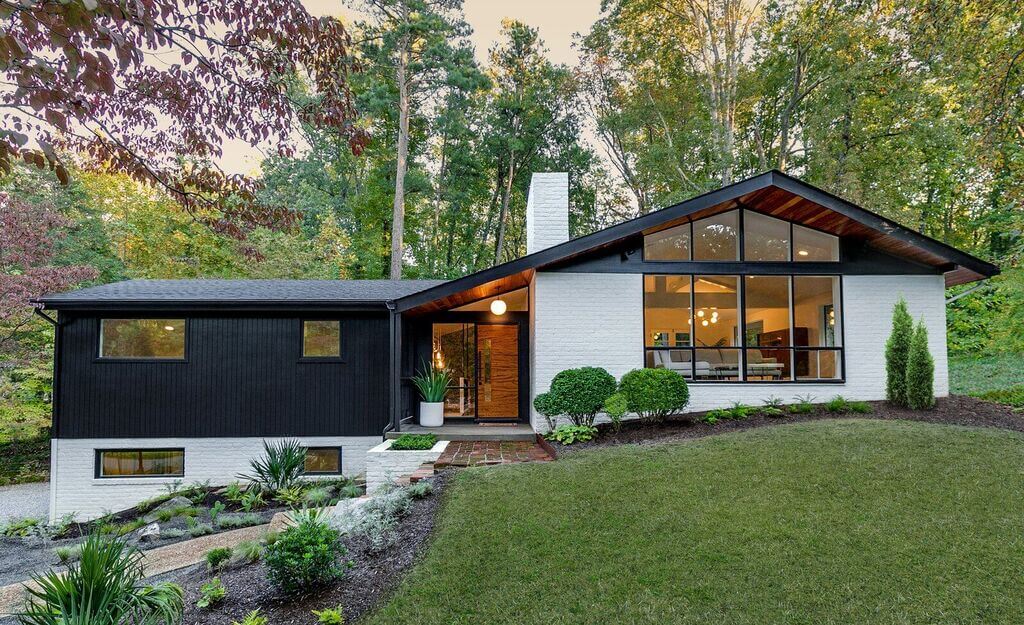 Most mid-century modern homes typically feature sleek and clean lines. Having a simple geometry, the roofs change elevation at multiple points for creating visual interest and diverse volumetric configurations in the interiors.

Mid-century modern homes have extensive and large windows that sometimes make up the whole facade of the structure. The style is high on glass and other materials that were considered modern at the time of its inception. Huge rows of windows allow ample light into the space making it seem spacious and airy.

The style was a shift away from the ornamentations of the traditional style of architecture and thus embraces a minimal aesthetic. It advocates a perfect synthesis of form and function making a simple yet appealing exterior. Mid century modern houses are typically boxy and rectilinear in their massing with just enough number elements for giving character to the facade.

Mid century modern houses are articulated in a way that they seem to be a part of the surrounding landscape. These minimal structures enhance the connection of the house with the surroundings through the use of large windows. They also make one feel at one with nature by incorporating natural materials like wood and stone as a part of the structure along with modern structural materials. 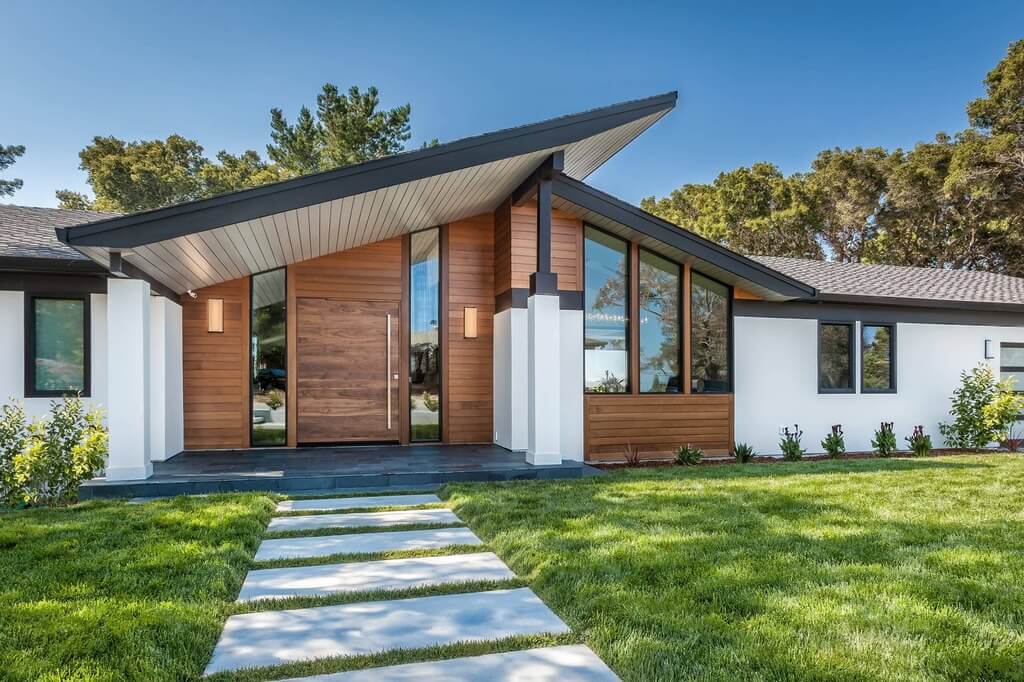 A classic mid century modern house is a synthesis of simple sleek and angular lines. The traditional style house is juxtaposed by a dynamic angular roof covering the central porch. The contrast created by the wooden shingles makes this house a perfect blend of modern and mid-century styles.

The large windows and minimalistic facade make for a visually balanced classic house design. The surrounding landscape being simplistic in nature further adds to the timeless charm of the home. 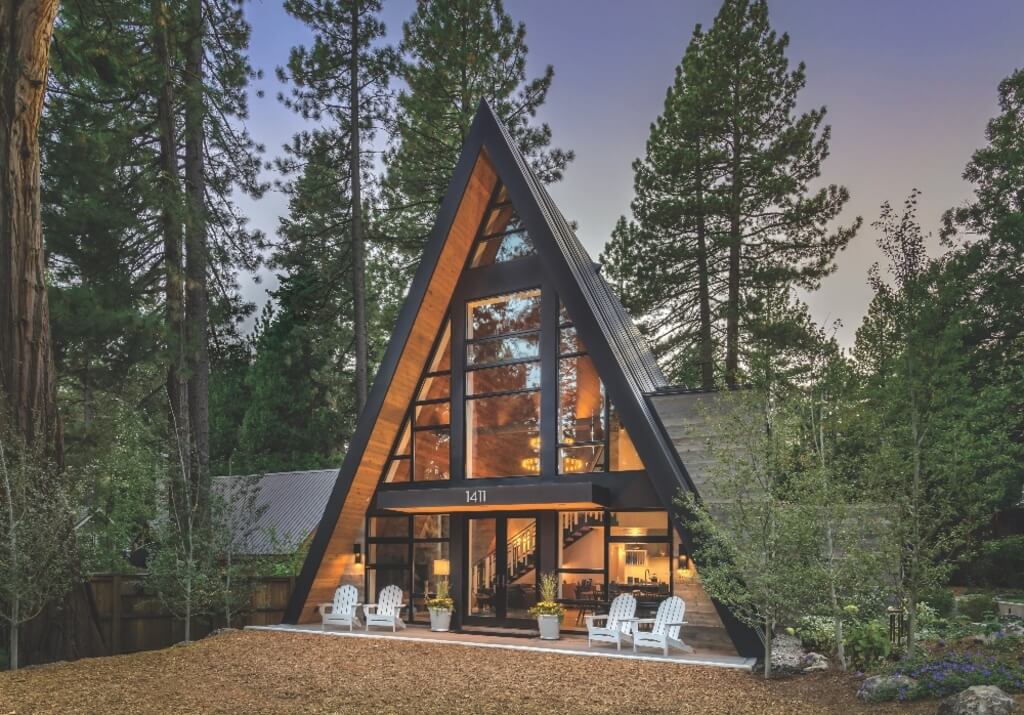 A charming mid-century cabin home is a perfect second home or vacation option. This cabin in the woods has open mid century modern house plans. It is a quintessential A-frame home with sizeable floor-to-ceiling windows and a rustic ambiance.

The simple open plan of the house accommodates all the functional requirements of its users and serves as a glamping hub. The striking form of the house is perfectly complemented by the picturesque landscape around it. 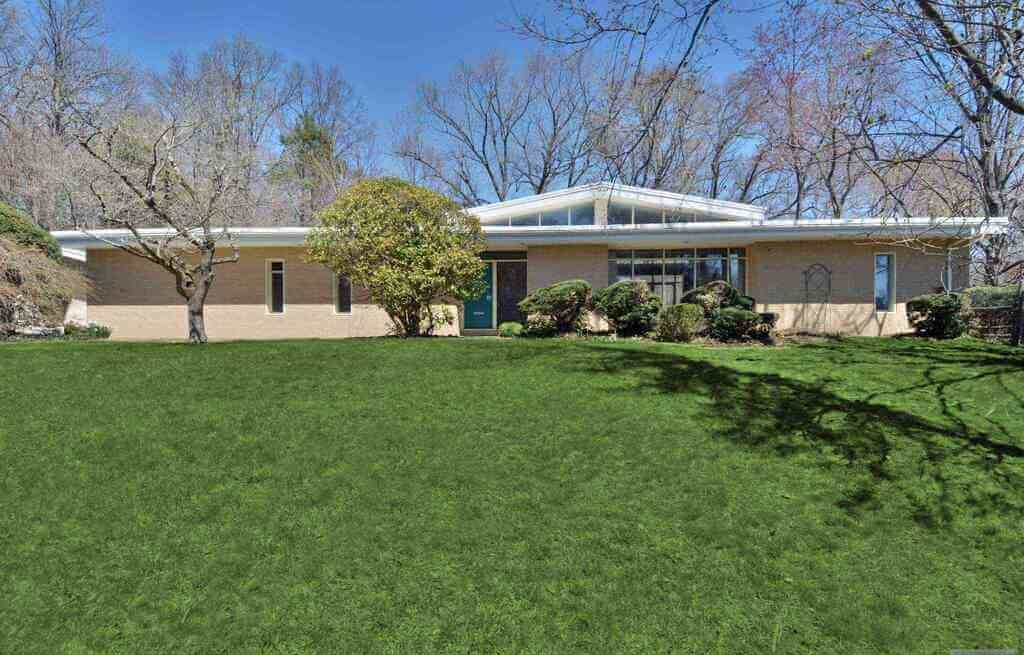 Featuring a mid century modern house plan, this ranch-style home is simply elegant. The mid-century modern style blended into a lot of typologies to create hybrid structures in the mid-1900s. Rectilinear mass with minimal ornamentation is a distinct feature of such homes.

The clubbed oversized windows in the center of the facade, along with the clerestory above food the interiors with ample daylight. The sprawling home with a stark horizontal silhouette sits graciously over a berm-like landscape. 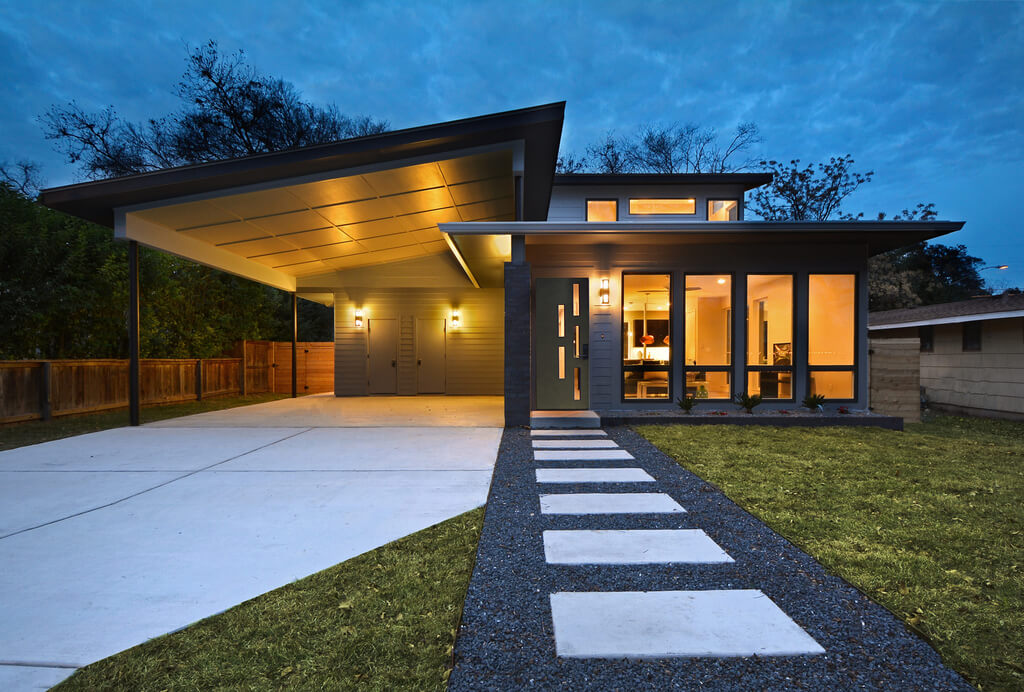 Minimalist mid-century modern homes continue to remain popular even today. Flat roofs consisting of sleek geometry, no ornamentation, and overhanging planes. They are generally made with a juxtaposition of various rectilinear forms.

The open-plan interiors when complimented by large oversized windows give an airy and spacious feel to the home. The dark material palette of the house gives it a sophisticated look. 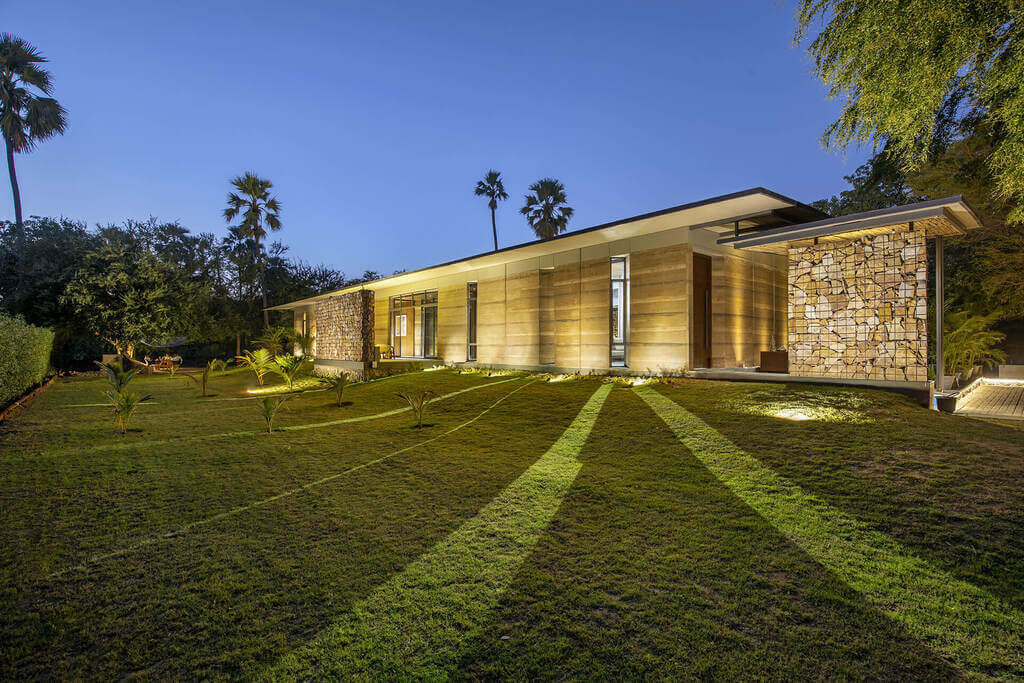 The material palette facilitates a better energy performance. The house expands the boundaries of the style by switching away from the conventional palette yet maintains the distinct features of the style. 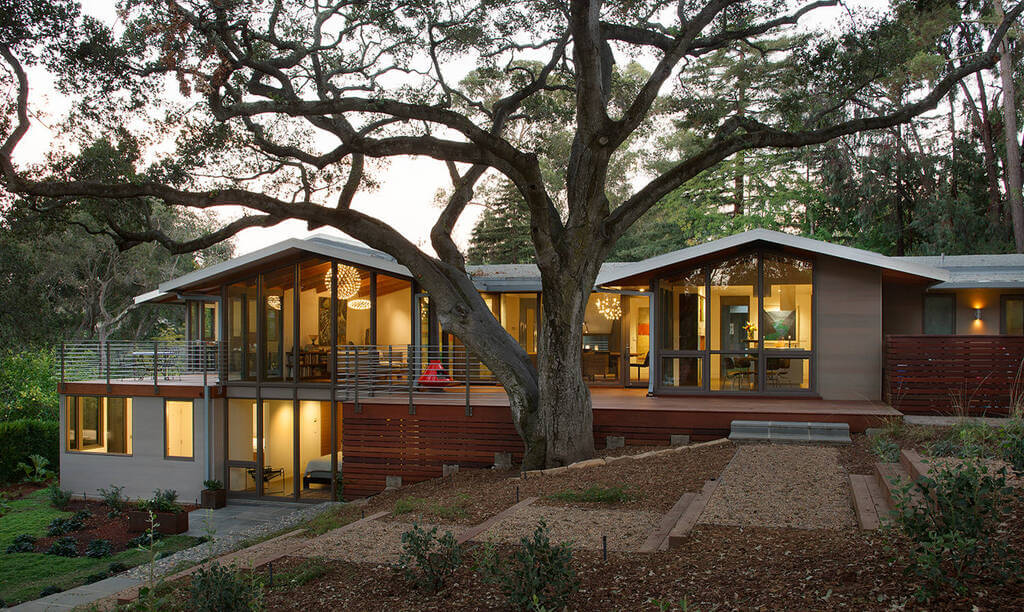 If the simple single-story home isn’t appealing enough for you then you can take inspiration from this mansion-like mid century modern house. The architecture of this house features the hallmarks of the mid-century modern style. Large windows, angular forms, and sleek horizontal, and vertical lines typically define this home.

The way the house is integrated with the surrounding landscape makes it even more appealing, creating dynamic spatial configurations in the interiors. On the inside, the house is glamorously adorned in state-of-the-art accents that sit perfectly well with the mid-century modern furniture pieces. 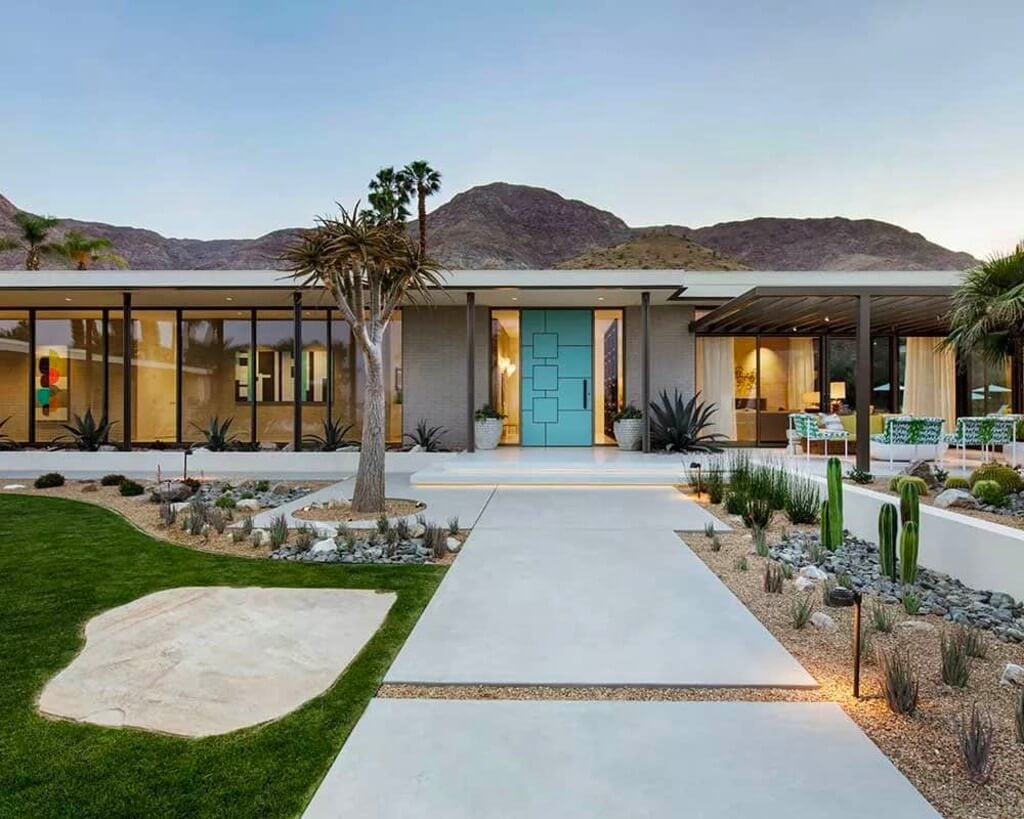 Mid century modern houses in warm climatic zones have a quintessential rugged minimalist aesthetic. They typically feature flat roofs and are horizontally massed. The material palette could be either all-white with the desired amount of openings or a warm-toned rustic material palette.

The house here consists of a  sleek horizontal mass with an extensive row of floor-to-ceiling windows that flood the interiors with ample light. Quirk design elements used here and there add character to the home. The surrounding landscape complements the built mass and collectively the house looks like it is a part of the overall landscape. 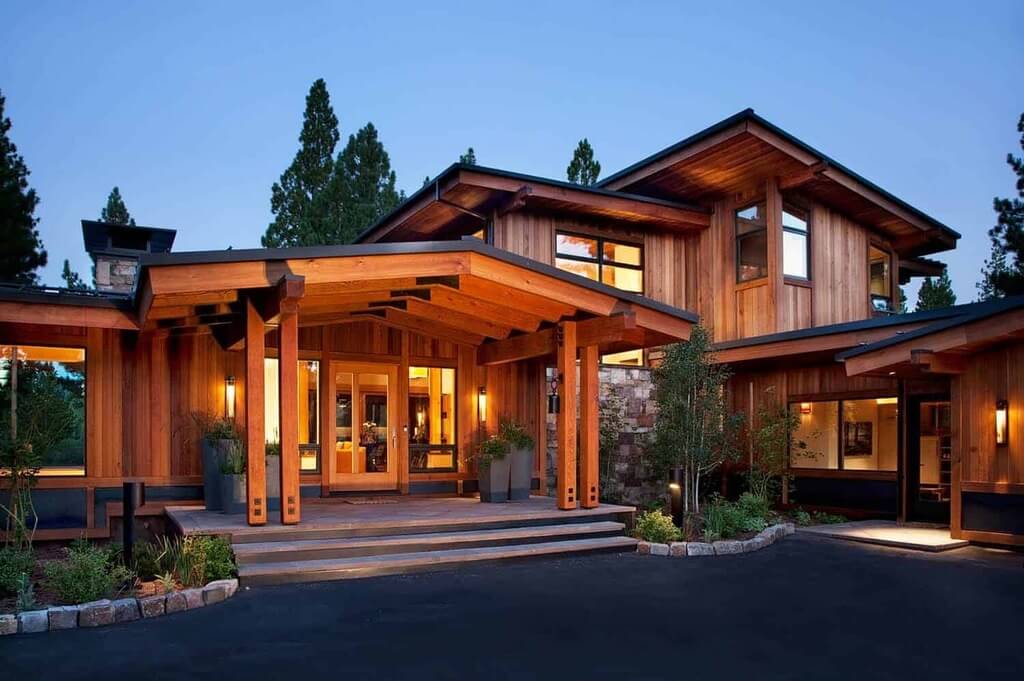 Mid-century modern home with a rustic vibe is simply delightful. A holistic material palette and exposed structural members are the defining features of this house. Exposed materials make one feel close to nature, while the stark angular form of the house gives it a dynamic look.

The warm color palette creates a cozy ambiance in the interior of this mid century modern house. The skillful juxtaposition of masses collectively assimilates a form that is remarkably stylish. Borrowed from the traditional style, a few of the features of the house have hints of timeless classical architecture style. 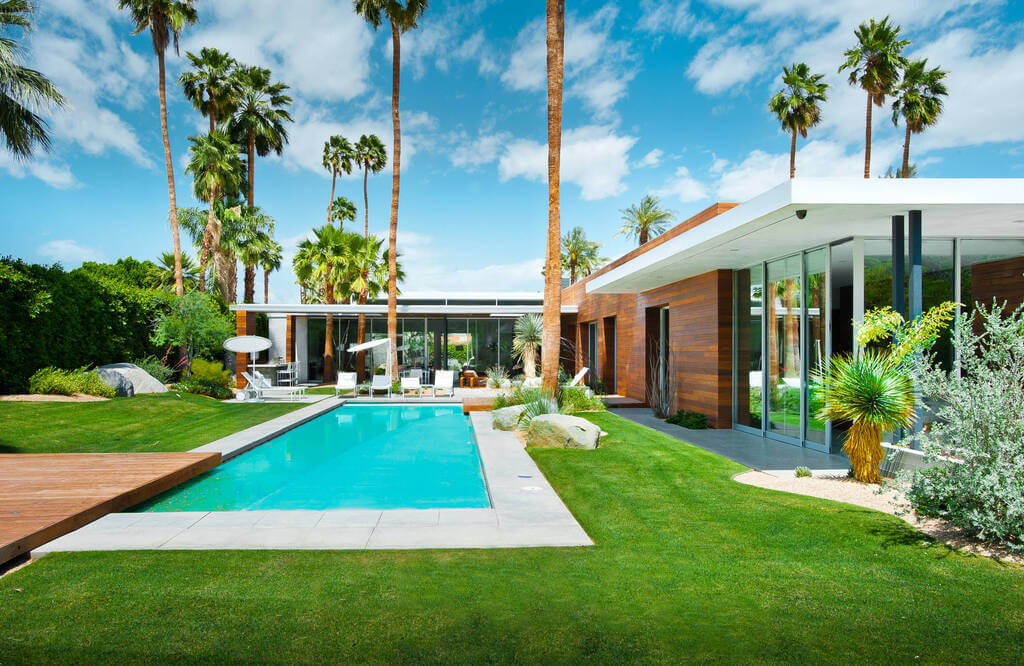 The mid-century modern styles were raging for most of the second half of the twentieth century. And, it comes as no surprise that the style has adaptations in various different typologies of houses. The one here is an ultra-luxe mid-century mansion with a spectacular backyard. 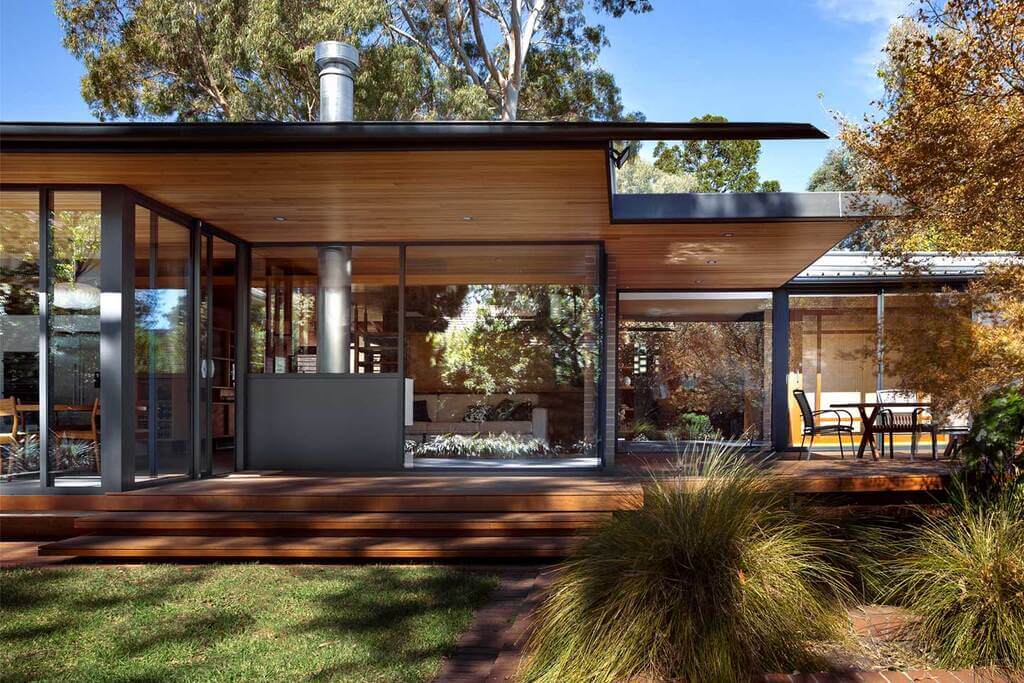 The true essence of the mid-century modern style is exemplified in simple flat-roofed homes like the one here. The clean lines make the large minimalist mass of the house sharply define the spatial configuration.

Sleek modern structural members along with huge glass walls and wood paneling curate a highly sophisticated look to the exterior of this mid century modern house. 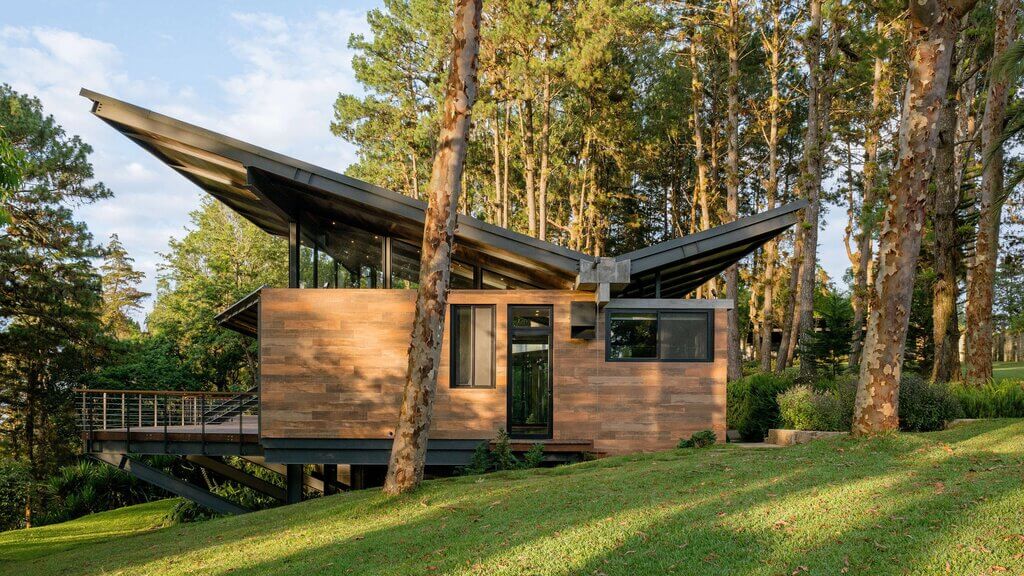 A striking feature of quite a few mid century modern houses is a butterfly roof. The dynamic inverted roof inspired by the insect’s wings gives an uplifted elegant edge to otherwise simple homes. The asymmetric roof profile creates interesting volumetric configurations inside the structure.

It also adds height to the structure making it seem spacious. The way the house sits on the sloping terrain adds to its dynamism of it. Providing interesting views of the surrounding, the extending deck makes the spaces welcoming. 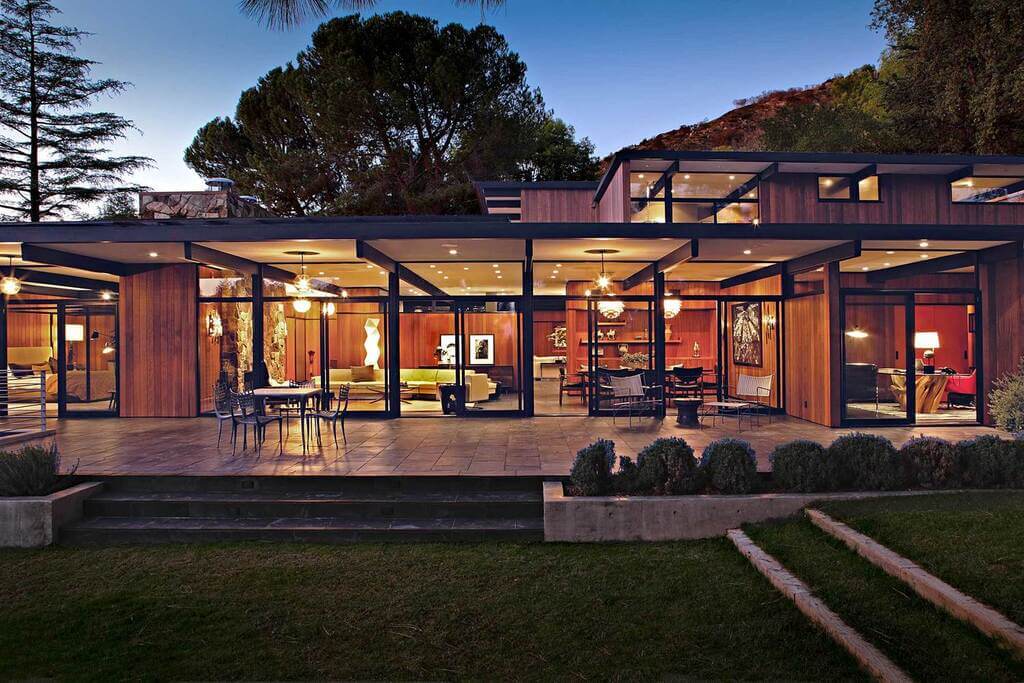 Contemporary style mid-century homes have a minimal yet luxurious aesthetic. It uses a rich display of fine materials and generally has a natural texture. The structure has a rhythmic grid made using sleek components.

Occupying a linear footprint, these structures tend to be single or double-storeyed, with huge ceiling heights. They remain minimally opaque with glass windows making most parts of the house. 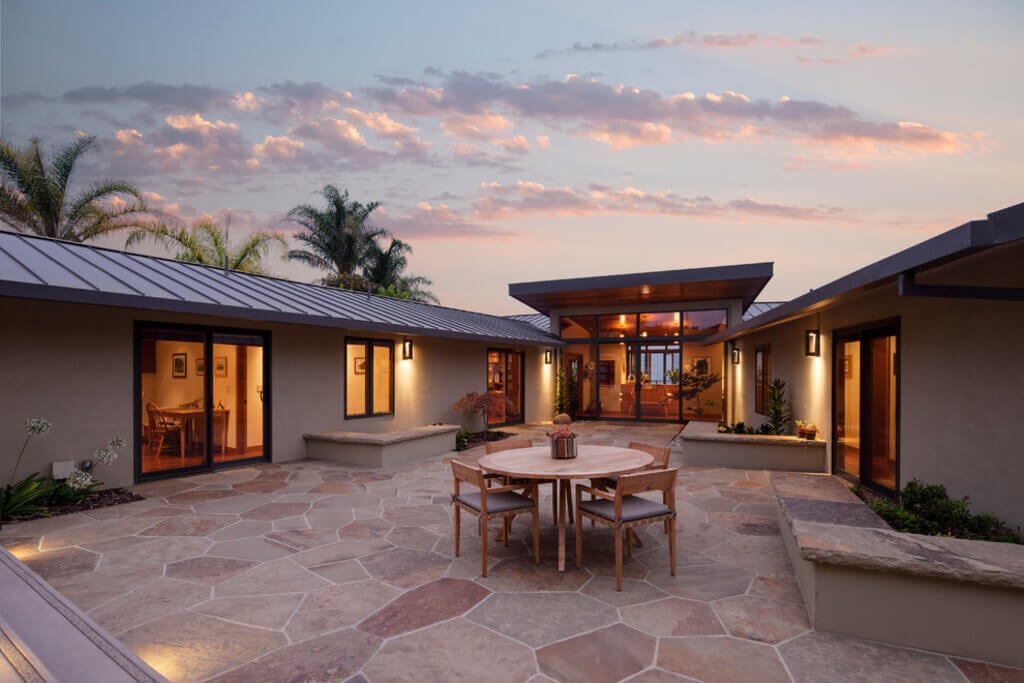 A courtyard in a mid-century modern home is a warm and welcoming space, perfect for gatherings. This mid-century courtyard home has a charming and timeless appeal.

Taking cues from the traditional style, this house’s classic sloping roofs combine with the modern features of full-length glass windows to create a balanced mid-century home. The simple and minimal form of the house sets the perfect ambiance for a cozy house interior. 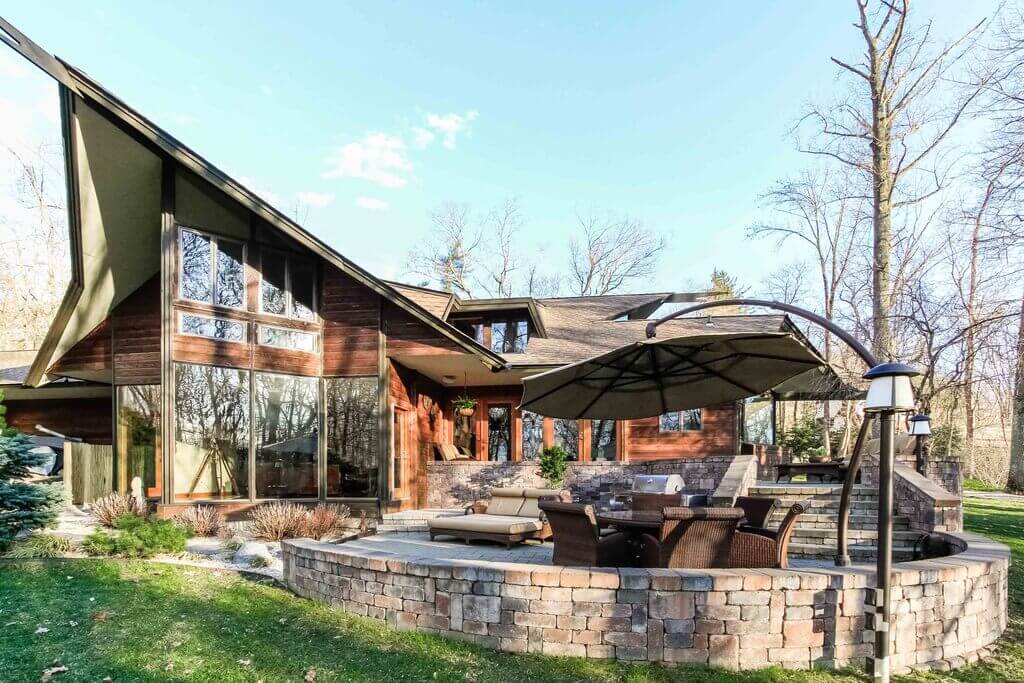 The house is a synthesis of rustic natural materials, contemporary dynamism, and the dated charm of the mid-century style. Although the house has several unique features, it does stick to the basic characteristics of the mid-century modern style. 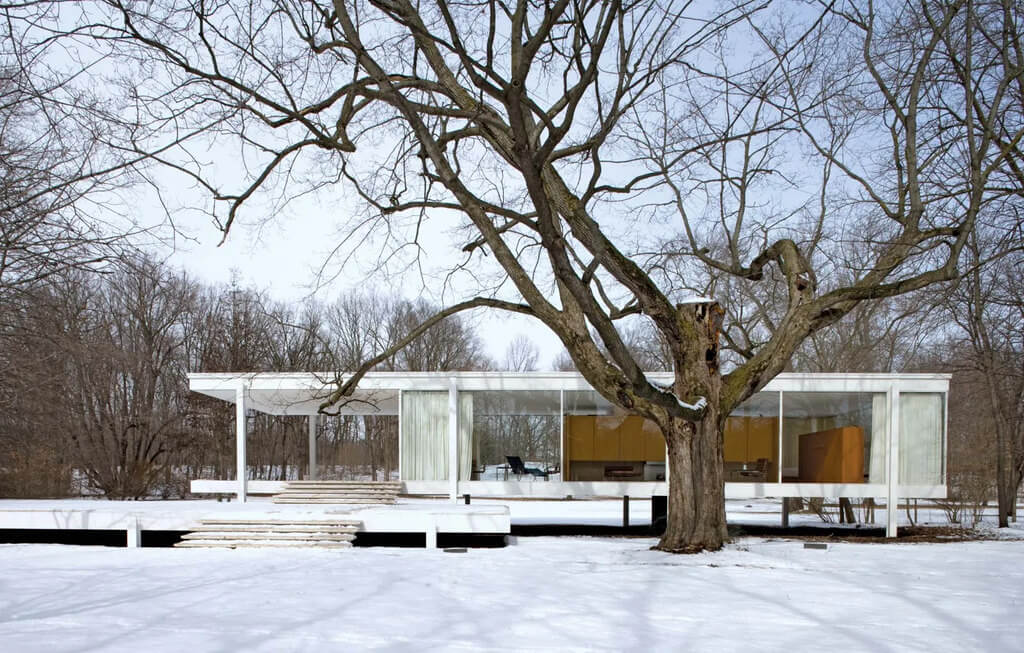 One cannot list ideas related to the mid-century modern style by excluding the marvelous glass house from the mix. The remarkable house was considered a wonder when it was first built. It was revolutionalizing at the time, with its stark minimal aesthetic.

The house combines a crisp structural grid made using modern materials alongside full-length glass walls. The simple rectilinear form sits elegantly on the vast landscape, doing just enough to define the space within. The transparency of the house establishes a strong connection with the surrounding, making the house an integral part of the landscape. 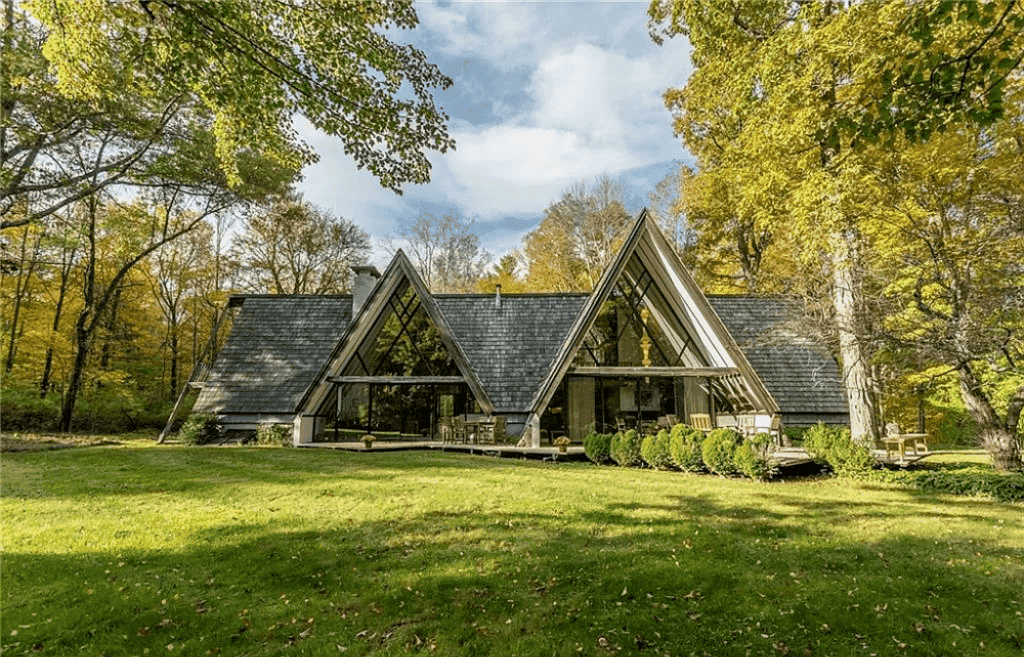 The organic, at-par-with-nature aesthetic of the house combines with the angular structure to create a stark structured design. A peculiar feature of such homes is their spatial dynamics, and the quality of the interiors, which are diversely articulate. 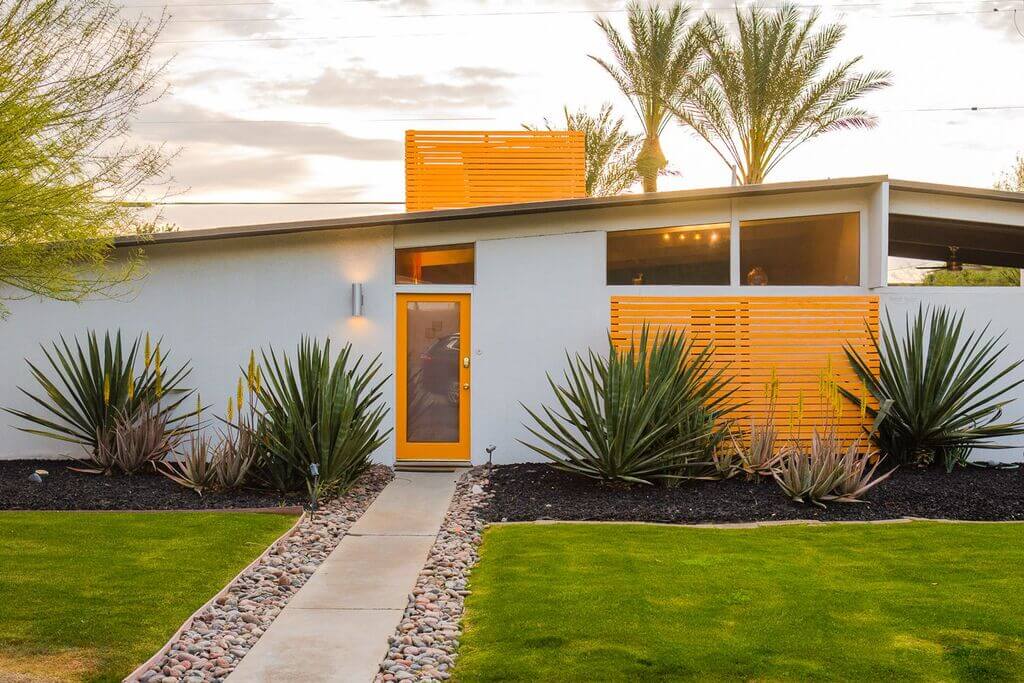 A retro-style mid century modern house oozes eclectic drama. A minimalist aesthetic is intertwined with vibrant pops of colors and quirky dated elements. The two design styles contrast each other yet combine to create an elegant mid-century modern home.

The trick here lies in highlighting the elements that are typical of the style, for instance, the horizontal louvers are a staple of the mid-century styles. Coloring them in vibrant hues superimposes the character making it an evident feature of the house.

18. Mid-Century Modern House with a Dome 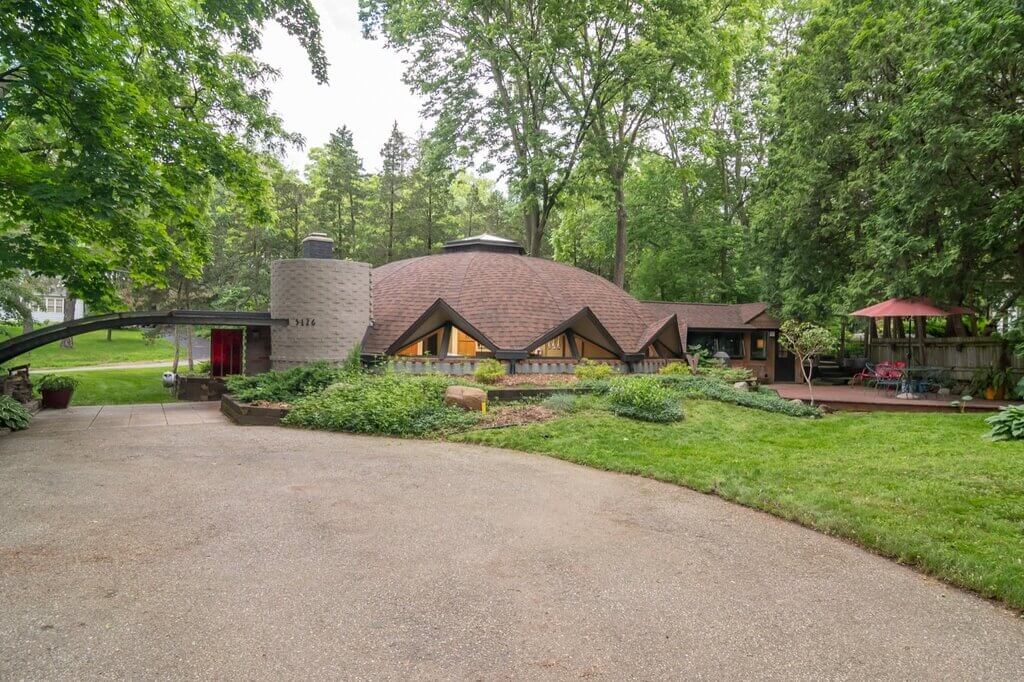 One of the most unique mid century modern houses is a domed structure. The visionary house is simply spectacular. Apart from it being a stunning roofing option, it is also energy-efficient, thanks to its surface-to-volume ratio.

For the interiors, it creates spacious interiors with increased height. The clerestory windows elegantly peeking from the dome allow ample light into the space. The natural material palette blends the structure with the surrounding landscape. 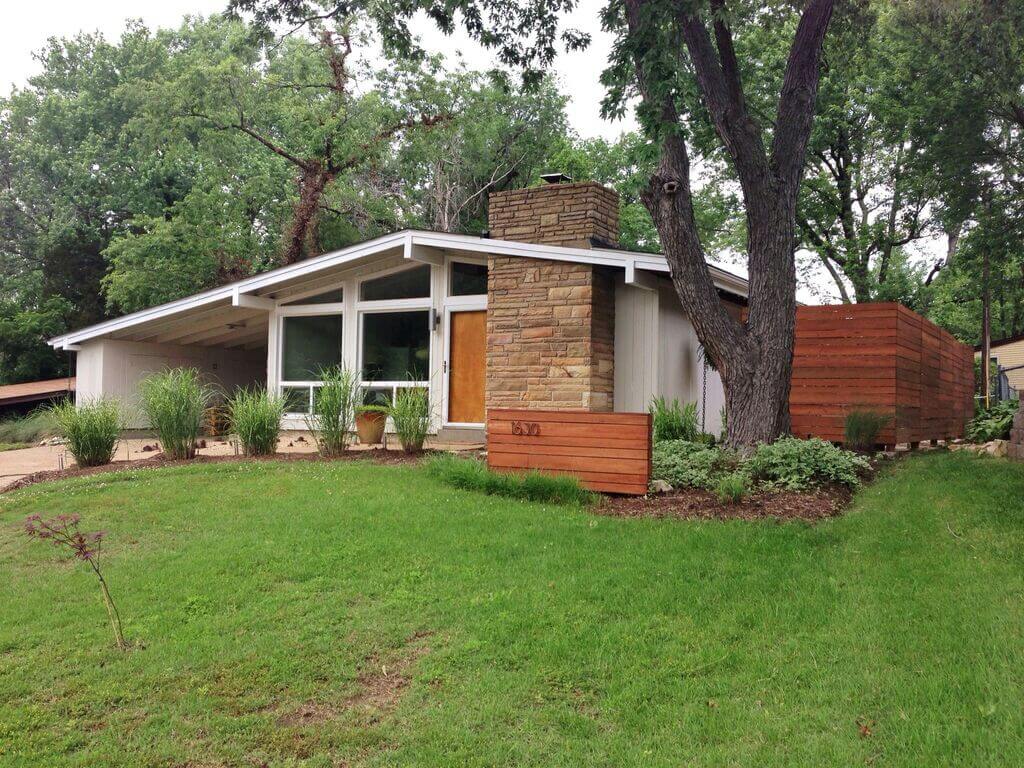 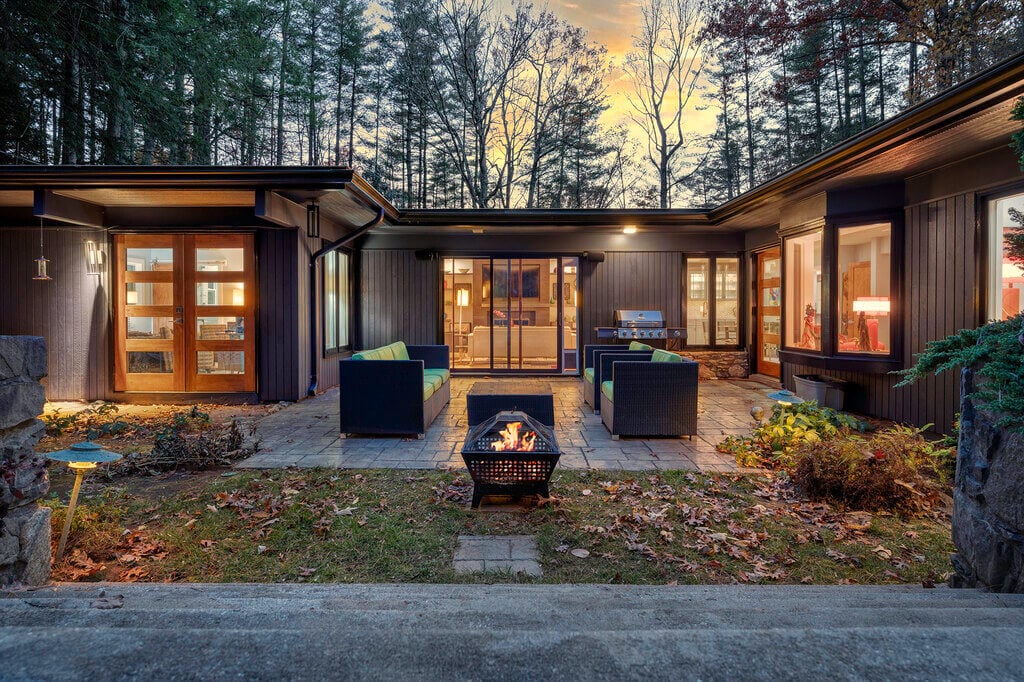 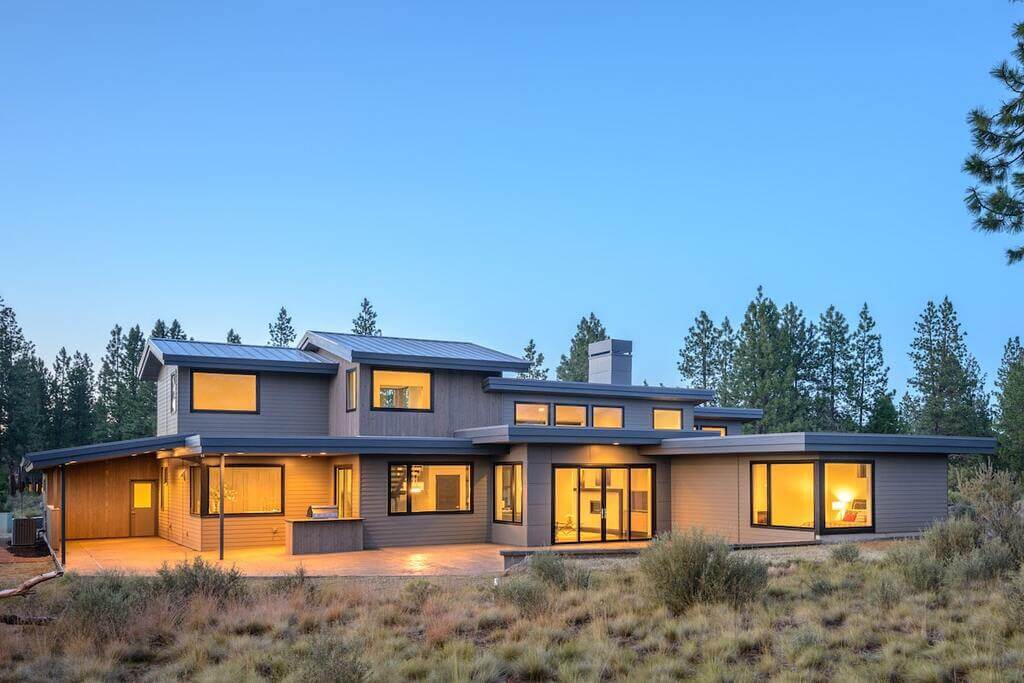 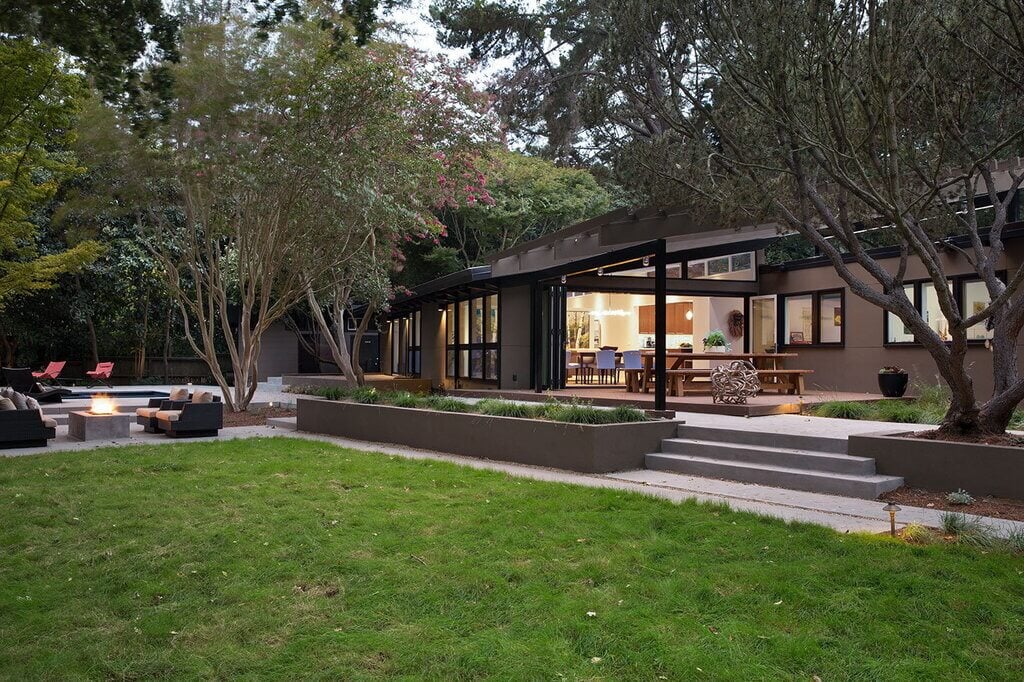 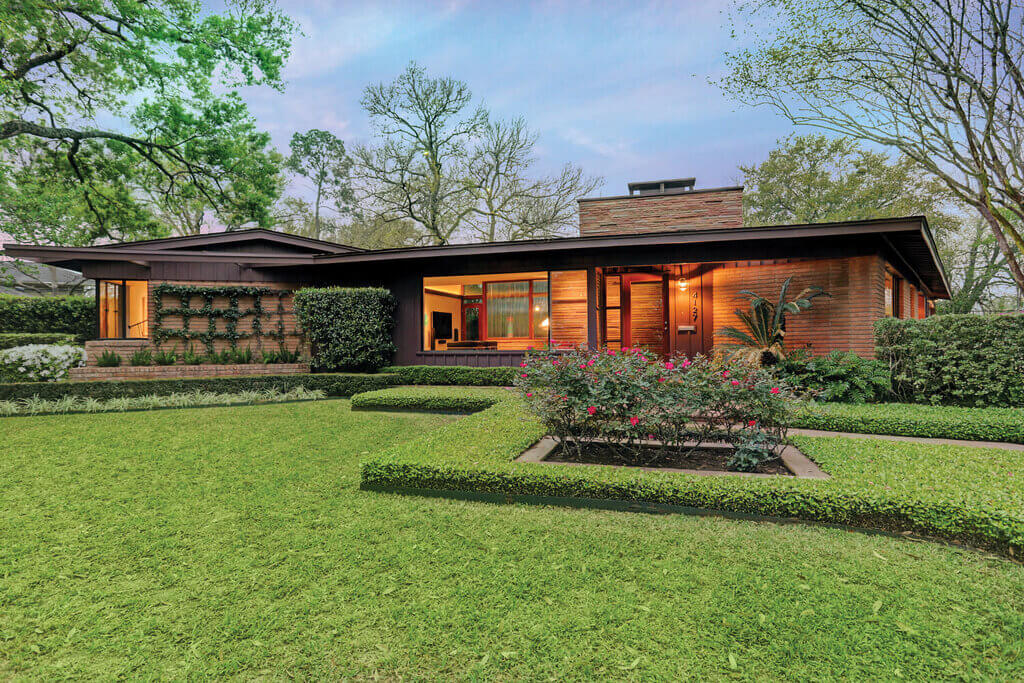 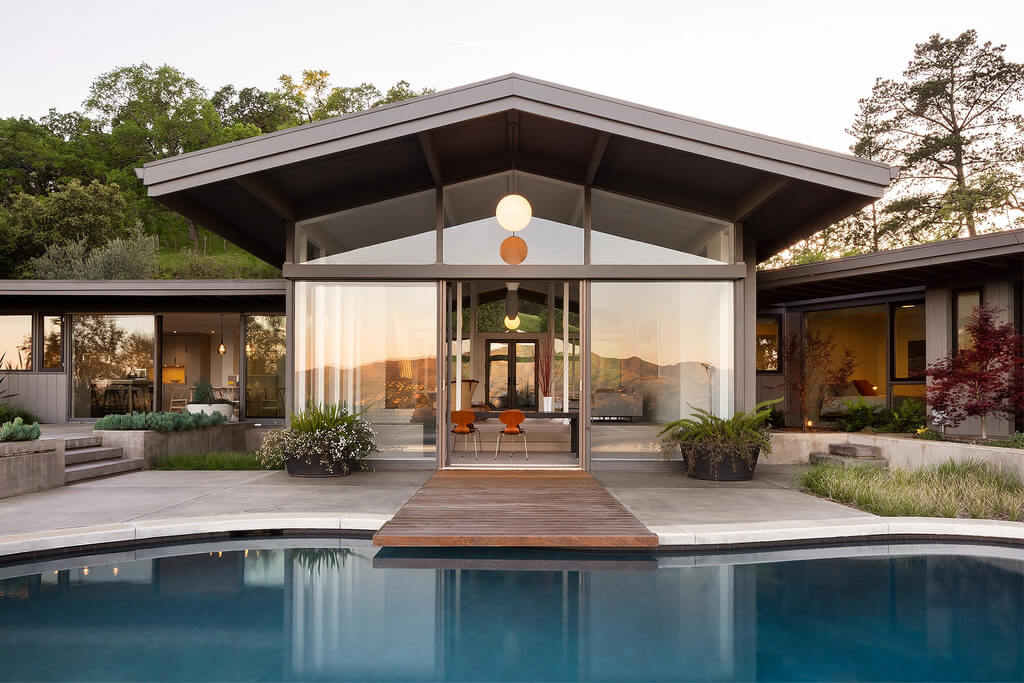 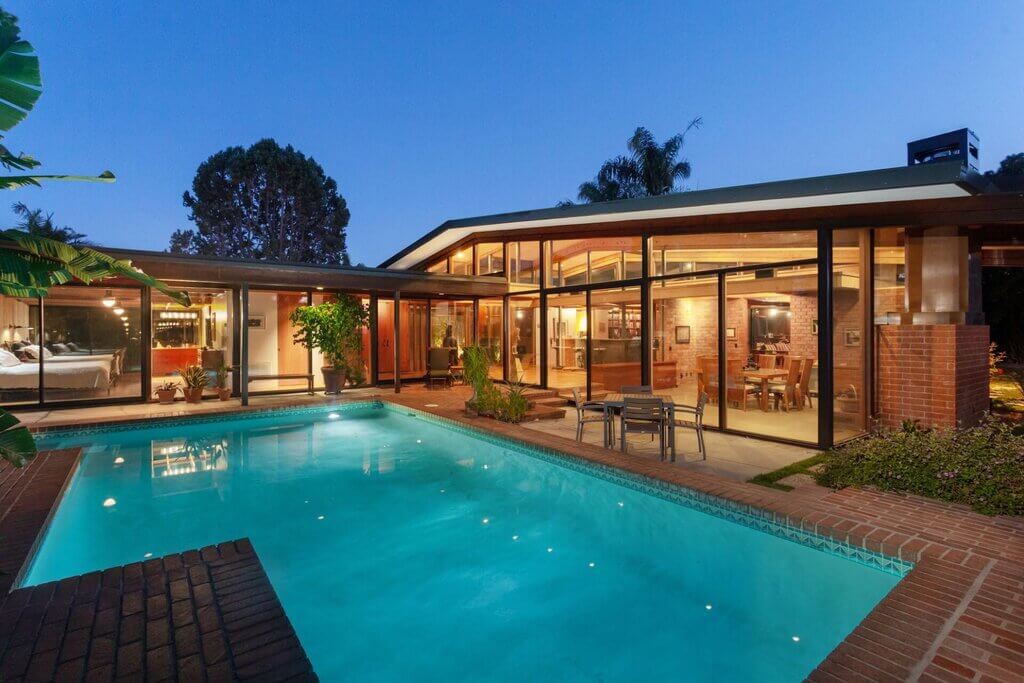 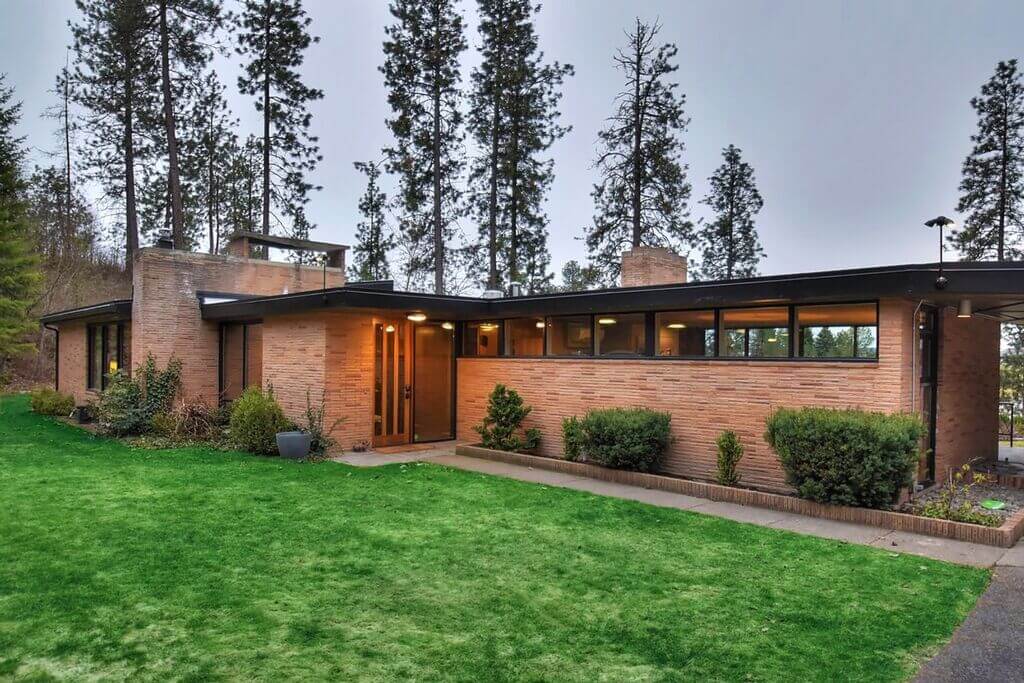 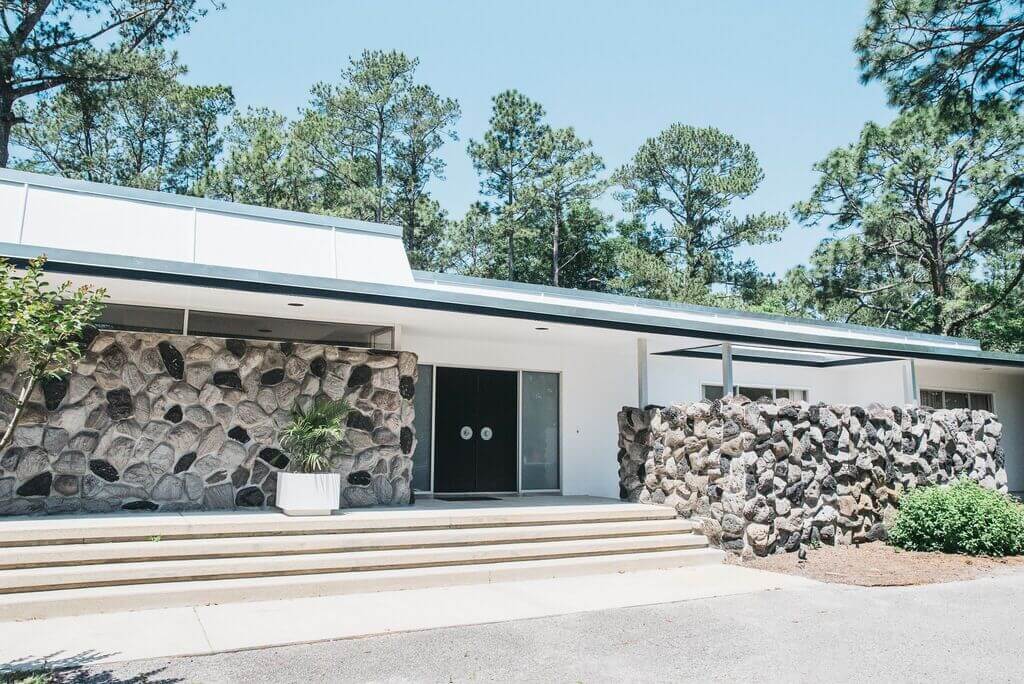 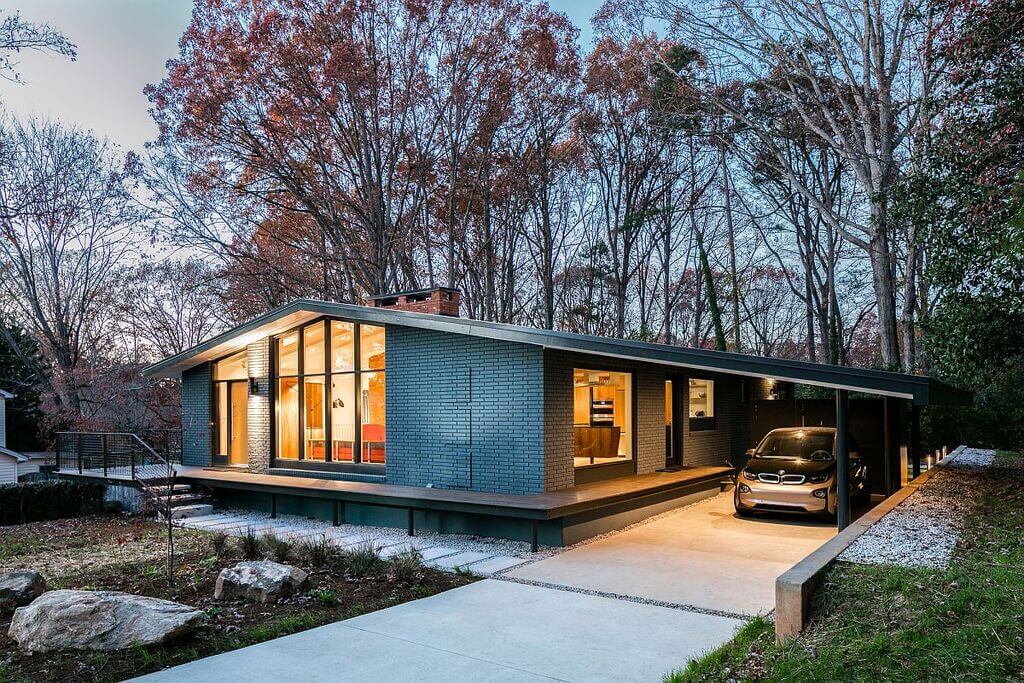 Their simplistic charm is unbeatable. Even after years since its inception, the style continues to remain relevant and much-loved. Apart from being a popular architectural style, mid-century modern furniture is an integral part of most homes.

1. What Is a Mid-Century Modern-Style House?

A mid-century modern house is typically a minimalistic home with flat and low-lying mass. It features large windows, and sleek lines and has an enhanced connection to its surrounding.

The houses built in 1945-1969 are considered mid-century modern homes.

3. Is Mid-Century Modern Going Out of Style?

4. What Is 20th-Century Modern Architecture?

20th-century modern architecture consisted of several different iterations, all of which were on the lines of minimalist style. Simple functional buildings with little to no ornamentation and the use of modern materials were the defining features of the style.

How Freestanding Bathtubs Can Impact the Selling Price of Your Home?

A freestanding bathtub stands alone without a connection to the wall. This adds space to the bathroom area and provides …